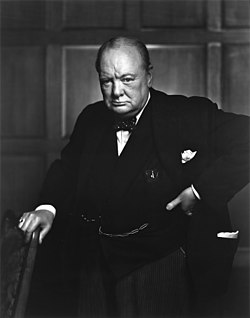 Sir Winston Leonard Spencer-Churchill KG OM CH TD DL FRS RA (30 November 1874 – 24 January 1965) was a British politician, army officer, and writer, who was Prime Minister of the United Kingdom from 1940 to 1945 and again from 1951 to 1955. As Prime Minister, Churchill led Britain to victory in the Second World War. Ideologically an economic liberal and British imperialist, he was a member of the Liberal Party from 1904 to 1924 before joining the Conservative Party, which he led from 1940 to 1955. Churchill represented five constituencies during his career as Member of Parliament (MP).

Nature will not be admired by proxy.

I wanted us to go to the Tories when we were strong. . . not in misfortune to be made an honest woman of.

All dogs look up to you. All cats look down on you. Only the pig looks at you as an equal

If I were the first of May, I should be ashamed of myself.

It is arguable whether the human race have been gainers by the march of science beyond the steam engine. Electricity opens a field of infinite conveniences to ever greater numbers, but they may well have to pay dearly for them. But anyhow in my thought I stop short of the internal combustion engine which has made the world so much smaller. Still more must we fear the consequences of entrusting a human race so little different from their predecessors of the so-called barbarous ages such awful agencies as the atomic bomb. Give me the horse.

When I warned them [the French] that Britain would fight on alone whatever they did, their generals told their Prime Minister and his divided Cabinet, In three weeks England will have her neck wrung like a chicken. Some chicken! Some neck!

We are weakened and we are tired, but we are not done yet.

It is more agreeable to have the power to give than to receive.

India is a geographical term. It is no more a united nation than the Equator.

I had been brought up and trained to have the utmost contempt for people who got drunk - and I would have liked to have the boozing scholars of the Universities wheeled into line and properly chastised for their squalid misuse of what I must ever regard as a gift of the gods.

When danger is far off we may think of our weakness; when it is near we must not forget our strength.

May the pain you have known and the conflict you have experienced give you the strength to walk through life facing each new situation with courage and optimism.

There is not one single social or economic principle or concept in the philosophy of the Russian Bolshevik which has not been realized, carried into action, and enshrined in immutable laws a million years ago by the white ant.

To jaw-jaw is always better than to war-war.

Socialism would gather all power to the supreme party and party leaders, rising like stately pinnacles above their vast bureaucracies of civil servants no longer servants, no longer civil.

The American Constitution declares 'All men are born equal. ' The British Socialist Party add: 'All men must be kept equal'.

It happens that once we learn a thing, the motivation to keep it up grows and expands further as well. If you're going through hell, keep going.

We are waiting for the long-promised invasion. So are the fishes.