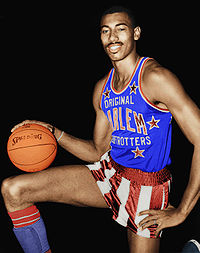 Wilton Norman Chamberlain (/ˈtʃeɪmbərlɪn/; August 21, 1936 – October 12, 1999) was an American basketball player. He played for the Philadelphia/San Francisco Warriors, the Philadelphia 76ers, and the Los Angeles Lakers of the National Basketball Association (NBA); he played for the University of Kansas and also for the Harlem Globetrotters before playing in the NBA. The 7 foot 1 inch Chamberlain weighed 250 pounds as a rookie before bulking up to 275 and eventually to over 300 pounds with the Lakers. He played the center position and is widely considered one of the greatest and most dominant players in NBA history.

Villains are kind of hard to really know on a personal level when you see them as mean, unsensitive-type people.

People say my ego is grand. I think it's in proportion to me.

I guarantee you, if you could give me 10 points in all those seventh games against the Boston Celtics, instead of Bill Russell having 11 rings, I could've at least had nine or eight.

We make too much of winning. The mere fact of winning doesn't make you great.

That's my tag, whether I like it or not.

All of the sudden, my right leg caved in. I crumpled to the floor in pain. The doctor weren't sure I'd ever be able to play again. . . and even if I did recover physically, the psychological scars of so traumatic an injury might never heal.

Monogamy is the true path to happiness.

And I remember leaving my place in L. A. and - my father is a big fight fan - and I said, 'Dad, I got a couple of days off and I'm getting ready to go to Houston to sign to fight Muhammad Ali.

A big dog tends to be much more at ease with kids and gentle with them than a little one that's always yelping.

I get constant reminders from fans who equate that game and my career as one and the same.

I've prided myself on being in excellent condition-as good as any man in my profession. Now this doesn't come from sitting around on your rear end. This comes from hard, hard work.

Everybody pulls for David, nobody roots for Goliath.

It was a challenge to my teammates to help me.

My thing I liked was to challenge guys that were smaller, guys that were supposed to be quicker. Because I think self-consciously I was trying to prove to people it wasn't just my height that was getting me across in these various sports. It was some other intrinsic things that I had that made me a good athlete.

I believe that good things come to those who work.

When I was a freshman, I fooled around with shooting free throws this way: For some reason, I thought you had to stay within the top half of that free-throw circle, so I would step back to just inside the top of the circle, take off from behind the line and dunk. They outlawed that, but I wouldn't have done it in a game, anyway. I was a good free throw shooter in college. " Actually he was a 62% free throw shooter, which is poor except in comparison to his 51% as a pro.