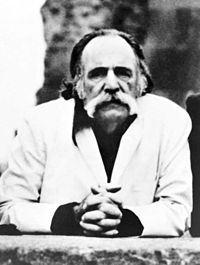 William Saroyan (/səˈrɔɪən/; August 31, 1908 – May 18, 1981) was an Armenian-American novelist, playwright, and short story writer. He was awarded the Pulitzer Prize for Drama in 1940, and in 1943 won the Academy Award for Best Story for the film adaptation of his novel The Human Comedy.

The people you hate, well, this is the question about such people: why do you hate them?

Try to be alive. You will be dead soon enough.

People is all everything is, all it has ever been, all it can ever be.

Nobody, but nobody, is going to tell me I'm not the most. I am. I was the most when everybody else was struggling bitterly to become a little.

Become, Everybody, Littles, Self, Struggle, Struggling

Art is what is irresistible.

The order I found was the order of disorder

What can a man do to move along in some kind of grace through his days and years?

Jack Benny had style from the beginning. He stood straight and walked kind of sideways as if he were being gently shoved by a touch of genius.

My work has always been the product of my time.

Nothing good ever ends.

Kids are always the only future the human race has.

The child race is fresh, eager, interested, innocent, imaginative, healthy and full of faith, where the adult race, more often than not, is stale, spiritually debauched, unimaginative, unhealthy, and without faith.

You must remember always to give, of everything you have. You must give foolishly even. You must be extravagant. You must give to all who come into your life. Then nothing and no one shall have power to cheat you of anything, for if you give to a thief, he cannot steal from you, and he himself is then no longer a thief. And the more you give, the more you will have to give.

The people you like when you meet them and while you know them, and the people you remember fondly, are invariably people who have a sense of comedy, not just a sense of humor.

Cowards are nice, they're interesting, they're gentle, they wouldn't think of shooting down people in a parade from a tower. They want to live, so they can see their kids. They're very brave.

No enemy is so annoying as one who was a friend, or still is a friend,and there are many more of these than one would suspect.

Live, for this is the time of your life.

I always know a lie when I hear it, and the effect it has on me is no good at all. I go berserk just forcing myself not to go berserk, just trying to see truth in the lie, to see it in full context, and in a dimension in which it has got to be more than just a lie, possibly the profoundest kind of truth.

It is simply in the nature of Armenian to study, to learn, to question, to speculate, to discover, to invent, to revise, to restore, to preserve, to make, and to give.

In the most commonplace, tiresome, ridiculous, malicious, coarse, crude, or even crooked people or events I had to seek out rare things, good things, comic things, and I did so.