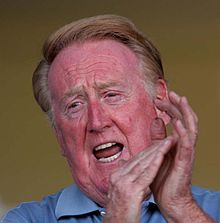 Vincent Edward Scully (born November 29, 1927) is an American retired sportscaster. He spent 67 seasons with the Los Angeles Dodgers, starting in 1950 (when the franchise was located in Brooklyn) and ending in 2016. His run constitutes the longest tenure of any broadcaster with a single team in professional sports history, and he is second only to Tommy Lasorda (by two years) in terms of number of years associated with the Dodgers organization in any capacity. He retired at age 88 in 2016, ending his record-breaking run as their play-by-play announcer.

All my life I've worked and I was so lucky to go from a radio station in Washington to the Dodgers and of course, it never stopped. For me to suddenly put the key in the ignition and turn the engine off, it's kind of a frightening thought. I put the key in and left it there, God willing, for another year.

We survive our way through basketball hoping the #‎ Lakers will survive and we hope for the #‎ Kings and for the #‎ Ducks and we want them all to succeed but if you are a true fan and especially if you are a #‎ Dodgers fan deep down inside you are saying please get out of the way, get off the stage, here come the DODGERS!

I would always say to kids, don't be afraid to dream, because it can happen.

As long as you live keep smiling because it brightens everybody's day.

Good is not good when better is expected.

And also it's an ever-gathering process. If I pick up the Sporting News or some sports publication and there's an article on somebody and I think I might see that player, I will tear it out and put it in a file, and I have a looseleaf book so when we're going to play that particular team I take out all these clippings and things I pulled out, I go through them, highlight them, put them in the book.

God willing I will be back next year. Over the years I have been blessed to have so many friends including those that sit in the stands and listen as well as those at home, who listen and watch. It is just too hard to say goodbye to all these friends. Naturally there will come a time, when I will have to say goodbye, but I've soul-searched and this is not the time.

It's a wonderful feeling to be a bridge to the past and to unite generations. The sport of baseball does that, and I am just a part of it.

Some people die twice: once when they retire, and again when they actually pass away. Fear of the first one is a big incentive for me to keep working.

I was saying on the air: "Victorino used the Twitter and he sent a twit to tell the fans he was coming. " Well, the city went hysterical. The sky nearly fell down from laughter. I always thought that if you are going to use Twitter, it's going to be a twit. Why would it be a tweet?

The roar of the crowd has always been the sweetest music. It's intoxicating.

I guess my thermometer for my baseball fever is still a goose bump.

In a year that has been so improbable, the impossible has happened…

I've always felt, it's a gift of God, whatever I have, whatever has made me do what I do for as long as I do it. But I know I can lose that in one second. A stroke. Whatever. One second. Blow the whole thing. So, when you do think about that, you realize how fortunate and how blessed you've been, and that's really how I feel.

He (Bob Gibson) pitches as though he's double-parked.

I don't watch teams other than Dodgers on TV and I watch the Dodgers games sparingly. I like to refresh my mind at night, so I like to read. For me, watching baseball at night, it would be like an insurance man reading actuary tables. I like to escape.

I really love baseball. The guys and the game, and I love the challenge of describing things. The only thing I hate - and I know you have to be realistic and pay the bills in this life - is the loneliness on the road.