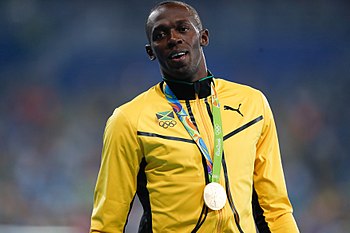 Usain St Leo Bolt OJ CD (/ˈjuːseɪn/; born 21 August 1986) is a retired Jamaican sprinter and world record holder in the 100 metres, 200 metres and 4 × 100 metres relay. His reign as Olympic Games champion in all of these events spans multiple Olympics. Due to his achievements and dominance in sprint competition, he is widely considered to be the greatest sprinter of all time.

I know what I can do, so I never doubt myself.

Can Do, Doubt, Know, Knows

I have learned that if this is what I am going to do, and do it well, then I have to avoid drinking.

Avoid, Drinking, I Have Learned, Wells

I would rather be lying in a bed than changing one.

When people contact me on Instagram or Facebook, kids and adults, who say, "You're an inspiration. You make me want to work hard to achieve my goals. " If I can still do that after I retire that makes me feel good.

It was not perfect but I'm very happy. It could have been better, but I'm now looking forward to my second race of the season.

If you feel strongly about something and you want to voice your opinion, I feel it's your right, so, that's how I look at it because that's how life is.

I don't even like to go out onto the streets sometimes because I can't get anything done. People want pictures and autographs all the time.

I actually had nuggets and mostly Asian food when I was at the Olympics. But as soon as I got back to Jamaica, or when I was in London, I had a lot of wings. That was the first thing I asked for - "Hey, get me some wings. "

All I have to do is to work on transition and technique.

I have just accepted certain things and it makes it easier. I accept I will get injured. I accept I cannot win every race. I work hard to decrease the chances of those things happening but I accept they will happen. A lot of people don't accept it. They get injured, they go crazy.

One of the things we're trying to do more of is not just take money from corporate partnerships, but get more involved in the business side for when I retire. So Puma are going to make me an ambassador for life. I have a clothing line coming out. I am investing a lot in housing in Jamaica, buildings for rent.

As long as I'm in great shape, nobody beats me, for sure.

Rihanna, Beyonce and Nicki Minaj - we may not win, but we would have a lot of fun [in 4x400m relay team].

For me he (Tendulkar) is one of the greatest cricketers

People always say I'm a legend, but I'm not. Not until I've defended my Olympic titles. That's when I've decided I'll be a legend.

I really want to try soccer after I retire because I've watched football over the years and I think I could be a good contender.

I always support Argentina. I watched a lot of the European Championships but wasn't supporting one team. I knew some players in a few of the teams and was just seeing how they played. It was nice for Ronaldo to win with Portugal.