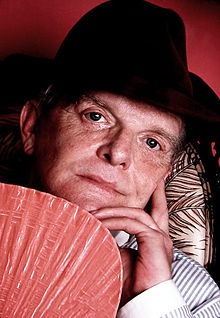 Truman Garcia Capote (/ˈtruːmən kəˈpoʊti/; born Truman Streckfus Persons, September 30, 1924 – August 25, 1984) was an American novelist, screenwriter, playwright, and actor. Many of Capote's short stories, novels, plays, and nonfiction are recognized as literary classics, including the novella Breakfast at Tiffany's (1958) and the true crime novel In Cold Blood (1966), which he labeled a "nonfiction novel". At least 20 films and television dramas have been produced from Capote novels, stories, and plays.

Did you ever, in that wonderland wilderness of adolesence [sic] ever, quite unexpectedly, see something, a dusk sky, a wild bird, a landscape, so exquisite terror touched you at the bone? And you are afraid, terribly afraid the smallest movement, a leaf, say, turning in the wind, will shatter all? That is, I think, the way love is, or should be: one lives in beautiful terror.

I don't mean I'd mind being rich and famous. That's very much on my schedule, and someday I'll try to get around to it; but if it happens, I'd like to have my ego tagging along. I want to still be me when I wake up one fine morning and have breakfast at Tiffany's.

Even an attorney of moderate talent can postpone doomsday year after year, for the system of appeals that pervades American jurisprudence amounts to a legalistic wheel of fortune, a game of chance, somewhat fixed in the favor of the criminal, that the participants play interminably.

Are the dead as lonesome as the living?

But there were moments when she played songs that made you wonder where she learned them, where indeed she came from. Harsh-tender wandering tunes with words that smacked of pinewoods or prairie. One went: Don’t wanna sleep, Don’t wanna die, Just wanna go a-travelin’ through the pastures of the sky; and this one seemed to gratify her the most, for often she continued it long after her hair hard dried, after the sun had gone and there were lighted windows in the dusk.

But mostly they were lies I told; it wasn't my fault, I couldn't remember, because it was as though I'd been to one of those supernatural castles visited by characters in legends: once away, you do not remember, all that is left is the ghostly echo of haunting wonder.

Sicily is more beautiful than any woman.

There's something really the matter with most people who wear tattoos. There's at least some terrible story. I know from experience that there's always something terribly flawed about people who are tattooed, above some little something that Johnny had done in the Navy, even though that's a bad sign. . . It's terrible. Psychologically it's crazy. Most people who are tattooed, it's the sign of some feeling of inferiority, they're trying to establish some macho identification for themselves.

Rusty thinks I should smoke marijuana, and I did for a while, but it only makes me giggle.

And yes, to answer you seriously, I am beginning to be. . . well, not bored, but tempted; afraid, but tempted. When you've been in pain for a long time, when you wake up every morning with a rising sense of hysteria, then boredom is what you want, marathon sleeps, a silence in yourself.

It's bad enough in life to do without something YOU want; but confound it, what gets my goat is not being able to give somebody something you want THEM to have.

The feeble-minded, the neurotic, the criminal, perhaps, also, the artist, have unpredictability and perverted innocence in common.

I hated Hemingway. I liked Faulkner but he was a bore.

She is pure Alice in Wonderland, and her appearance and demeanor are a nicely judged mix of the Red Queen and a Flamingo.

I don't use a typewriter, I write longhand, with a pencil. Essentially I'm a horizontal writer. I think better when I'm lying down.

That's all a writer has to write about - what he sees and hears and what not.

Yes: but aren't love and marriage notoriously synonymous in the minds of most women? Certainly very few men get the first without promising the second: love, that is--if it's just a matter of spreading her legs, almost any woman will do that for nothing.