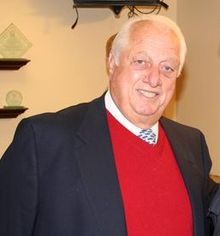 Thomas Charles Lasorda (born September 22, 1927) is a former Major League Baseball pitcher who is best known for his two decades as manager of the Los Angeles Dodgers. In 2017, he marked his 68th season in one capacity or another with the Brooklyn/Los Angeles Dodgers organization, the longest tenure anyone has had with the team, edging Dodger broadcaster Vin Scully by two seasons. He was inducted into the National Baseball Hall of Fame as a manager in 1997.

You give loyalty, you'll get it back.

Back, Give, Giving, Loyalty, Motivational

I wasn't quite sure how a player got to the big leagues. As far as I knew, he was just there one day.

The only Angels in Los Angeles are in Heaven, and they're looking down on the Dodgers.

Sometimes, you get too hopped up, too excited, and it works against you.

Listen, if you start worrying about the people in the stands, before too long you're up in the stands with them.

I'm so excited I had a seven-car police motorcycle escort. I've had escorts before, but nothing like this. . . I'm really in awe, coming here and seeing so many cars, so much enthusiasm.

The difference between the impossible and the possible lies in a man's determination.

One time I was doing a speech to a group of kids, and just before I get there, I see this little kid crying. I found out they just lost a game, and he was the losing pitcher. I went over there, put my arm around him, and said, 'What are you crying for? When major league players lose, they don't cry. '

When you - when you become the manager of a major league team, particularly the Dodgers, to me, that's a privilege and an honor. No matter where you go or what you do, you represent that position that you have. And you represent that organization that gave you the opportunity to be doing what you're doing.

My theory of hitting was just to watch the ball as it came in and hit it.

Sometimes you've just got to let an umpire know that you're not satisfied with his decision. That they've missed the play in your opinion. Not that it's going to do you any good, but you've got to let them know.

I was glad to see Italy win. All the guys on the team were Italians.

Pressure is a word that is misused in our vocabulary. When you start thinking of pressure, it's because you've started to think of failure.

When you're not playing up to your capability, you gotta try everything, to motivate, to get them going. All of them have to be on the same end of the rope to pull together. It's playing for the name on the front of the shirt, not the back. Individualism gets you trophies and plaques. Play for the front, that wins championships. I try to remind them of that.

Everything, Names, Play, Shirt, Together, Winning

Everywhere I go, I feel strange.