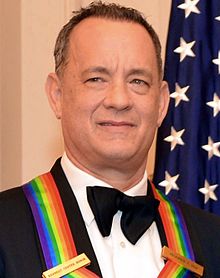 'Larry Crowne' is about as bummed out a human being as one can be when he loses his job. What he is able to enjoy is something that may not be available to everybody. But it's about the value of being willing to get and willing to give good advice.

I view my wife as my lover, and we have a bond that goes beyond words like wife or girlfriend or mother.

There's this misconception that the Navy is this cruise ship, and you get to go out and sail around, and every now and then, you have to swab the deck. But, no, it is a very impressive group of young people that live at sea, in this place that's very uncomfortable. They exude a pride that is well-deserved.

As a young man, even if I was going to see a play or a film by myself, I didn't feel like I was alone. There was something that was unfolding up there that brought me into it. And I recognised that. For those two hours, it made me feel like I belonged to something really good.

The filmmakers aren't running the studios anymore. Sometimes people who like films are making them, but by and large, they have to go report quarterly earnings and all that stuff. The competition is so huge that it's very hard to get people to show up to see any movie in the theater, much less an original one that isn't a version of something else they saw.

Making a film is to make sure that everybody looks forward to coming to work.

The only way you can truly control how you are seen is by being honest all the time.

Now, learning how to make a movie is something you can figure out in about an afternoon. The physics of it, the marks, the lights, etc. What's hard to do is to suspend your own feelings of self consciousness. The natural actors can do that; they can become part of a characterization and learn how to maintain it.

Help and you will abolish apathy-the void that is so quickly filled by ignorance and evil.

For some people, I will be Forrest Gump for the rest of my life. But that's OK; that's a good thing.

I know that my work in this case is magnified by the fact that the streets of heaven are too crowded with angels. We know their names. They number a thousand for each one of the red ribbons that we wear here tonight. They finally rest in the warm embrace of the gracious creator of us all. A healing embrace that cools their fevers, that clears their skin, and allows their eyes to see the simple, self-evident, common sense truth that is made manifest by the benevolent creator of us all. . .

Larger-than-life characters make up about. 01 percent of the world's population.

Most people want to be able to go off and deal with their day - stop in here, run errands there - and when you can't do that, going out becomes a chore.

The nature of the movies is different than it was five years ago, and they're all driven by the possibilities of CGI, which means you can make anything happen on screen that you can possibly desire.

When I was growing up, everybody in charge, my parents and teachers, had all survived the war, and they talked about the war like it was the Kraken - you know, this huge beast that roamed the earth during their formative years.

Mama always said, dying was a part of life. I sure wish it wasn't.

All the kids are gone. It's the greatest thing that has ever happened to Mr. and Mrs. Tom Hanks. I'll tell you that right now. Second greatest after having the kids in the first place. When they go, holy smoke, it's like you're dating again. It's fantastic. Also, we were doing an awful lot of work.

I want to have a good time myself. I don't want to dread going to work no matter what the gig is. I think, selfishly, I will make sure that I have a good time; how about that?