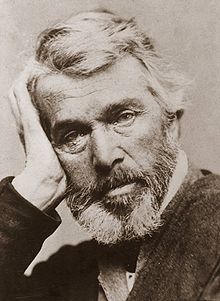 Thomas Carlyle (4 December 1795 – 5 February 1881) was a Scottish philosopher, satirical writer, essayist, translator, historian, mathematician, and teacher. Considered one of the most important social commentators of his time, he presented many lectures during his lifetime with certain acclaim in the Victorian era. One of those conferences resulted in his famous work On Heroes, Hero-Worship, and The Heroic in History where he explains that the key role in history lies in the actions of the "Great Man", claiming that "the history of the world is but the biography of great men".

Not on morality, but on cookery, let us build our stronghold: there brandishing our frying-pan, as censer, let us offer sweet incense to the Devil, and live at ease on the fat things he has provided for his elect!

Long stormy spring-time, wet contentious April, winter chilling the lap of very May; but at length the season of summer does come.

The eternal stars shine out as soon as it is dark enough.

The greatest fault is to be conscious of none.

No good book or good thing of any kind shows it best face at first. No the most common quality of in a true work of art that has excellence and depth, is that at first sight it produces a certain disappointment.

In books lies the soul fo the whole past time.

I grow daily to honor facts more and more, and theory less and less.

Shakespeare says, we are creatures that look before and after; the more surprising that we do not look around a little, and see what is passing under our very eyes.

Silence is the element in which great things fashion themselves together.

A background of wrath, which can be stirred up to the murderous infernal pitch, does lie in every man.

The secret of business is to know something that nobody else knows. The greatest of faults, I should say is to be conscious of none.

There is precious instruction to be got by finding we were wrong.

Misery which, through long ages, had no spokesman, no helper, will now be its own helper and speak for itself.

The times are very bad. Very well, you are there to make them better.

Cherish what is dearest while you have it near you, and wait not till it is far away. Blind and deaf that we are; oh, think, if thou yet love anybody living, wait not till death sweep down the paltry little dust clouds and dissonances of the moment, and all be made at last so mournfully clear and beautiful, when it is too late.

In a certain sense all men are historians.

The true past departs not, no truth or goodness realized by man ever dies, or can die; but all is still here, and, recognized or not, lives and works through endless change.

There is often more spiritual force in a proverb than in whole philosophical systems.

A battle is a terrible conjugation of the verb to kill: I kill, thou killest, he kills, we kill, they kill, all kill.