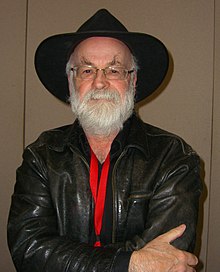 If you have enough book space, I don't want to talk to you.

I do not, in fact, use many puns. Certainly there are far fewer than people believe. But I suspect the ones I do occasionally use tend to hang around in people's memories for a while.

Monsters are getting more uppity, too (. . . ) I heard where this guy, he killed this monster in this lake, no problem, stuck its arm up over the door (. . . ) and you know what? Its mum come and complained. Its actual mum come right down to the hall next day and complained. Actually complained. That's the respect you get.

I can see we're going to get along like a house on fire," said Miss Tick. "There may be no survivors.

Ankh-Morpork had dallied with many forms of government and had ended up with that form of democracy known as One Man, One Vote. The Patrician was the Man; he had the Vote.

If failure had no penalty success would not be a prize.

The consensus seemed to be that if really large numbers of men were sent to storm the mountain, then enough might survive the rocks to take the citadel. This is essentially the basis of all military thinking.

Everything starts somewhere, although many physicists disagree.

Although, Disagree, Everything, Physicist, Physicists

The city's full of people who you just see around.

Unseen University was much bigger on the inside. Thousands of years as the leading establishment of practical magic in a world where dimensions were largely a matter of chance in any case had left it bulging in places where it shouldn't have places. There were rooms containing rooms which, if you entered them, turned out to contain the room you'd started with, which can be a problem if you are in a conga line.

He moved in a way that suggested he was attempting the world speed record for the nonchalant walk.

I'm referred to, I see, as 'the biggest banker in modern publishing'. Now there's a line that needed the celebrated Guardian proof-reading.

The thing with crowns is, it isn't the putting them on that's the problem, it's the taking them off.

There's that lovely thing for the first month or two of writing a new book: OK, I don't know what that character's going to do, but we'll find out later. After about three or four months you come to that bit where you've got to put some plot in before it's too late, and you have to go back and start inserting plot, and, ooh, I've left out the literature, OK, lets put some in.

And our lady friend, she thinks life works like a fairy tale. ' Well, that’s harmless, isn’t it?' Yeah, but in fairy tales, when someone dies. . . it’s just a word.

I tell you, commander, it's true that some of the most terrible things in the world are done by people who think, genuinely think, that they're doing it for the best, especially if there is some god involved.

I really wish that peoplewould just say, 'Yes, it's a comic. Yes, this is fantasy. Yes, this is Science Fiction,' and defend the genre instead of saying, 'Horror is a bit passe so this is Dark Fantasy,' and that' s playing someone else's game. So that's why I say I'm a fantasy writer and to hell with 'It doesn't read like what I think of as a fantasy'. In that case what you think of as a fantasy is not a fantasy. Or there is more to it than you think.

People are bound to get excited when they see a ten-million-ton starship trying to fly down the street.

Modesty is only arrogance by stealth.