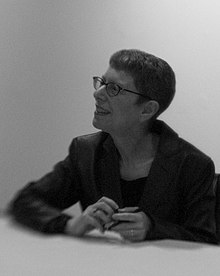 Terry Gross (born February 14, 1951) is the host and co-executive producer of Fresh Air, an interview-based radio show produced by WHYY-FM in Philadelphia and distributed throughout the United States by NPR. She has been in this position since 1975 and has conducted thousands of interviews over her 42 years at the job.

I was thinking about comedy and how comedy in many ways opens us up to ideas and really being influenced by Richard Pryor and sort of the way he would use comedy to really speak about larger social issues.

I respect someone's right to privacy and I want them to know it.

If you are interested in ideas, radio is way more pure than television. You're not distracted by somebody's nose or hair or posture. You can really see how someone thinks and penetrate to the essence of who that person is.

Hillary [Clinton] has been very guarded with the press.

I was in an adolescent psychology class at Citadel when the guy said, if you had a mother who was beaten, there's a great chance you'll beat your wife. And if you were beaten as a child, there's a terrific chance you're going to be a child-beater.

All my brothers and sisters have stories about Dad like this. I remember, when my sister was about to beat him in checkers for the first time, he knocked the board over.

There should be a revenue stream that helps pay for the publication or for the work and helps pay the people who do it.

Rapists who might've been convicted were free to assault other women.

I've never seen radio as the minor leagues, where I'm just really preparing to be in the show that really counts, namely, television, which is, I think, what people often assume. I've never felt that way.

I'm first generation American, and my parents were both from Nigeria. And so I always say that I'm literally an African American. So my last name is Famuyiwa, it's different. And so that was a part of my experience from people not being able to pronounce it to not sort of having sort of a shared, common history with a lot of the kids that I was growing up with because my parents were from Africa.

Dad mistook - for some reason unbeknownst to me - he mistook his family for a platoon of Marines. I mean, he - the exact same thing he brought to the disciplining of a squadron, a battalion, a platoon, he brought to the disciplining of his children. He ran the house - he had Saturday morning inspections for us, he had white-glove inspections for us as kids.

I learned that I never really know the true story of my guests' lives, that I have to content myself with knowing that when I'm interviewing somebody, I'm getting a combination of fact and truth and self-mythology and self-delusion and selective memory and faulty memory.

That era in the late '80s through the '90s was really when the music was so new, fresh, energetic, but still creative. It hadn't quite gotten corporatized yet.

The sex drive is one of the most fundamental human urges, and throughout history, there have been laws regulating what is considered acceptable sexual behavior. In the past century, the law has had trouble keeping up with changing social and moral standards.

I don't think my father noticed that he had daughters. I think, you know, part of the damage of the childhood was, I simply don't think they were acknowledged as human beings at all. Or - you know, one of the reasons I became a cook later on in my life was, I was not allowed to cook an egg.

"The Prince Of Tides" is a lot about my mother - what my mother would do after Dad would hit one of the kids or hit two of the kids, hit all the kids, hit her, she would usually get in the car. We'd drive out. She would say, I'm going to divorce him. I'm never going back.

I'm wondering if the Roger Ailes scandal in which more than 20 women have come forward accusing him of sexual harassment is going to affect that narrative that's directed against Hillary [Clinton] and her husband pertaining to his infidelities.

What puts someone on guard isn't necessarily the fear of being found out.

Google started as a free search engine. It's still free, but now it's making a lot of money on ads, right? A lot of money.