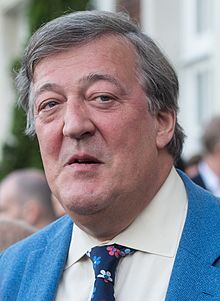 Stephen John Fry (born 24 August 1957) is an English comedian, actor, writer, presenter, and activist. He is well known as half of the comic double act Fry and Laurie, with collaborator Hugh Laurie, with whom he co-starred in A Bit of Fry & Laurie and Jeeves and Wooster.

Thank you for your input; I can tell you are struggling towards being interesting.

If you think you're going to have an eternity in which you can talk to Mozart and Chopin and Schopenhauer on a cloud and learn stuff and you know really get to grips with knowledge and understanding and so you won't bother now, I think it's a terrible, a terrible mistake.

I almost once wanted to publish a self help book saying, 'How To Be Happy, by Stephen Fry: Guaranteed Success'. And people buy this huge book and it's all blank pages, and the first page would just say, 'Stop feeling sorry for yourself--and you will be happy. '

I'm absolute attacking my own instinct for politeness, but I think I admire artists who just speak out or who are strong, so it's very hard.

My parents were marvelously educated people.

Generally, we admire the thing we are not.

It's certainly easy to mock some things. . . Oddly enough though I've never found it easy to mock anything of value. Only things that are tawdry and fatuous - perhaps it's just me.

I was born Mary Patterson, but then I married and naturally took my husband's name, so now I'm Neil Patterson.

The other man's arse is always cleaner!

There's nothing worse than the British in one of their fits of morality.

Supporting the English cricket team is like supporting a second division football team. I support Norwich City football team and when they lose I really don't mind because I expect them to; but when we win I'm so happy - much happier than any Arsenal supporter could ever be.

When push-off comes to shove-off, a man must have a reason to get out of bed in the mornings, something more than the threat of bedsores, at any rate.

It may be that there is an afterlife and I'll look incredibly stupid, but at least I will have had a crammed pre afterlife, a crammed life, so to me the most important thing is you know as Kipling put it. [. . . ] To fill every unforgiving minute with 60 seconds worth of distance run.

Humanism is an approach to life which encourages ethical and fulfilling living on the basis of reason and humanity, and rejects superstition and religion. The most immediate impact of living as a Humanist is that we believe this life is all there is - so what we do and the choices we make really count.

I've always been aware of my sexuality, but I never quite knew what it meant.

I like to think of myself at home in the armchair, writing, smoking and occasionally wandering down the shop.