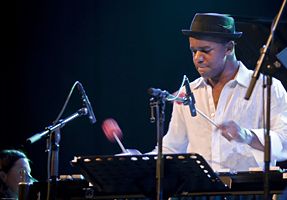 Stefon Harris (born March 23, 1973) is an American jazz vibraphonist. In 1999, the Los Angeles Times called him "one of the most important young artists in jazz" who is "at the forefront of new New York music" and "much in demand as a star sideman". Harris has played with several jazz luminaries including Kenny Barron, Steve Turre, Kurt Elling, and Charlie Hunter, in addition to releasing several of his own critically well-regarded albums.

Being at home with my family always inspires me. I find it hard to be inspired when I'm on the move. I'm not creative when I'm jet-lagged and sleeping in strange hotels.

It's about being here in the moment, accepting one another and allowing creativity to flow.

I'm a spa person. Massages keep me relaxed, so I always try to make time for them when I tour.

I listen to a lot of singers, because I find phrasing to be one of the most essential elements of playing.

Italy has great food and Barcelona has great energy

If I play the melody, even if I play it in an abstract manner, it's instantly recognizable. Even when I was studying to be a classical percussionist, I think I was a more lyrical percussionist; melody is the heart and soul of the music.

I think when you look back at the different eras in jazz, what leads from one to another is never a melodic revolution, but a rhythmic revolution.

I don't really see huge barriers between any styles of music. My definition of music is "organizing sound and silence into emotion," and that's a very broad definition.

I grew in the inner city, listening to Stevie Wonder, Donny Hathaway, James Brown, The Commodores - lots of soul music.

I think it all comes back to the individual. My instrument's just a pile of metal and wood! If you listen to the way I speak I have a lot of rhythm, use a lot of accents. When I'm playing my instrument that concept comes through very clearly. In fact some people who've seen me play have noticed that I'm singing - but it's more that I'm actually speaking. So it's not really about the instrument. But for me, in my thinking, the music is all about the melody. When I compose, 99 percent of the time I start with the melody.

Every ‘mistake’ is an opportunity in jazz.

I don't really see huge barriers between any styles of music.

Ultimately, what we do as musicians, I think of us as a type of emotional engineer. We essential take these sound waves, this sound, and we organize it into emotion, and that's how we connect with our audiences.

The bandstand is an incredible space. It is really a sacred space. One of the things that is really sacred about it is that you have no opportunity to think about the future, or the past.