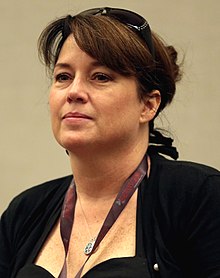 Sherrilyn Kenyon (born in 1965 in Columbus, Georgia, USA) is a bestselling US writer. Under her own name, she writes both urban fantasy and paranormal romance. She is best known for her Dark Hunter series. Under the pseudonym Kinley MacGregor she wrote historicals also with paranormal elements. Kenyon's novels have an "international following" with over 70 million copies in print in over 100 countries. Under both names, her books have appeared at the top of the New York Times, Publishers Weekly, and USA Today lists, and they are frequent bestsellers in Germany, Australia, and the United Kingdom.

(Adron leveled a scowl that made him shrink back. ) Jeeze, you ought to bottle that look. I know armies that would pay a fortune to have something that toxic in their arsenal. (Tiernan)

Are we even now? Or do you want to rape my body as much as you’ve raped my soul? (Acheron)

Val- I’m on Bourbon– (Acheron) I will not venture down that street of crass iniquities and plebeian horror, Acheron. It is the cesspit of humanity. (Valerius)

Things are always given to us when we need them. . . You just have to decide if you're strong enough, brave enough, to seize it and make it yours. (Acheron)

Can you just saw his arm off while we're here and get me loose? (Amanda) I could do that, but he needs his more. I'd cut yours off before I did his. (Tate) Oh, great, what are you, his Igor? (Amanda) Wrong movie, Igor was Frankenstein's flunky. Renfield is the one you're thinking of, and no, I'm not Renfield. Name's Tate Bennett. Parish coroner. (Tate)

You’re barely one step up from the Australopithecines, aren’t you? (Acheron) Hey, be respectful when you say that, snot nose. Haven’t you seen the commercials? Us cavemen are very sensitive people. (Savitar)

My father used to say that it’s not enough to just beat an attacker off. You have to hurt them enough that they’ll know not to tangle with you anymore. Or preferably kill them. (Wren)

For the moment, he's off plotting his Igoresque revenge. I don't know about you, but I have this image of him rubbing his hands together and laughing like Dexter from Dexter's Laboratory. (Kyrian)

Oh, by the way, is this your armor? (Grace) It is, or was. (Julian) Can we keep it? (Grace) If you like. Why? (Julian) ’Cause, ooo baby, you are one hot tamale in that getup. This outfit alone will get you laid at least four or five times a day. (Grace)

Then I’ll do some digging. (Fury) You just can’t help this kamikaze streak you have, can you? (Sasha)

Yeah, well, to hear you talk, most men should come with warning labels. (She lifted her hands up to frame her next statement. ) Attention, please, Psycho Alert. Me, he-man, am prone to nasty mood swings, lengthy pouts, and possess the ability to tell a woman the truth about her weight without warning. (Selena)

Like this cake. It’s really very good. (Arik) As the girth to my hips will attest. (Geary)

Looks like the safest spot here for a human who doesn’t want to get eaten. (Kish)

Hey, Dad, you’ve got to taste what we just did. It’s actually good. (Omari) That is good. What did you two do? (Devyn) No idea. We just added spices until it didn’t suck anymore. (Omari)

So help me, I won’t rest until I bathe in your entrails! (Apollymi)

Here we are. Maybe I should warn you before we enter. . . (Asmodeus) (Jericho stepped past him and threw open the door. ) Or maybe not. Let’s just barge in and be surprised, shall we? (Asmodeus)

In a dream I cannot see tangled abstract phallacy random turmoil builds in me i'm a addicted to chaos -Megadeth, Addicted to Chaos

Someone please tell me that we’re not seriously having a friggin’ debate over the genius of ‘Karma Chameleon’ at seven o’clock in the morning? (Xypher)