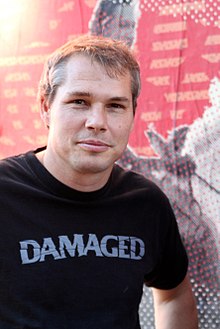 Frank Shepard Fairey (born February 15, 1970) is an American contemporary street artist, graphic designer, activist, illustrator and founder of OBEY Clothing who emerged from the skateboarding scene. He first became known for his "Andre the Giant Has a Posse" (…OBEY…) sticker campaign while attending the Rhode Island School of Design (RISD), which appropriated images from the comedic supermarket tabloid Weekly World News.

I'm mischievous. The idea of taking risks and having real-world consequences energizes me.

I've never really considered myself just a street artist. I consider myself a populist.

The problem with copyright enforcement is that when the parameters aren't incredibly well defined, it means big corporations, who have deeper pockets and better lawyers, can bully people.

If being original means having to throw paint in front of a jet turbine to hit a canvas 50 ft away then lets not be original.

I've never had an original thought in my lifeand there's tons of people on the internet happy to tell me just that.

There's good and bad in every arena. It's funny, some people, the reason they're in the underground is because they're lazy and don't make things happen for themselves.

If you're creating something that has some sort of cultural currency - if the idea is getting out there - then that will probably yield money in some form, whether it's through selling art or selling books or being asked to give a lecture.

I think that the influence of people with power and money to distort democracy and have their interests served before the rest of the population is the biggest problem. That is caused by two things: campaign finance and the way that's structured, and by the Citizen's United supreme court decision. So those two things are keeping democracy from working right.

I think the biggest thing that people fear when it comes to art becoming a business is those authentic, pure aspirations of art being compromised.

I try to find a balance between positivity and negativity, celebration and critique in my work; I think there is room for both.

If the idea that my safety can only be enhanced by putting other people's privacy and safety in danger, then I don't want to be more safe.

The sticker has no meaning but exists only to cause people to react, to contemplate and search for meaning in the sticker.

Public art is ephemeral by nature. Google 's new project not only catalogs an artist's work but archives it and allows people to see the art long after it has disappeared.

There's always a lot that's making me angry, but it won't tie into the election. I mean nothing against Hilary Clinton. I agree with Hilary on most issues, but campaign finance structure makes me very angry, because it means that politicians are going to have to raise a huge amount of money, which narrows the field dramatically.

I hate to say Americans are ignorant and lazy, but a lot of them are ignorant and lazy. It's just like what I was talking about with Rebel Music and art. When you live in a place that has a lot of good things that make life easier, it's easier to take them for granted. But what frustrates me to no end are people who want to blame Obama or blame anything that is something that if they were actually doing anything as simple as voting, it might not be as bad as it is.

The great thing about the Internet is, it has made it easier for people who are clever and resourceful to promote themselves.

I want to be proud of this country [the USA], but when aspects of our policy don't align with my ethics, I want to protest them and try to change them. Being complicit because it's the home team is nationalism, not patriotism.

I've met Obama a few times, and I think Obama's a quality human being, but I think that he finds himself in a position where your actions are largely dictated by things out of your control. I'm not giving him a pass for not being more courageous, but I do think the entire system needs an overhaul and taking money out of politics would be a really good first step.

Art making comes from the human desire to share something that is universal in one sense, but unique to your sensibility in another. I think that, wherever you are in the world, that impulse exists within human beings.

Skateboarding has always been and continues to be creative and rebellious. Art and design are an extremely important part of skateboard culture, even if it's not recognized by the more elitist or pretentious members of the art world. Skateboarding itself requires creative adaptation to the streets and obstacles. My background as a skateboarder helped me to be a better street artist because I was already conditioned to look at the terrain opportunistically.