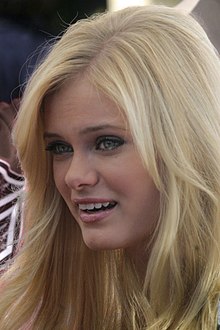 Sara Paxton (born April 25, 1988) is an American actress, singer and model. She is known for her role as the final girl Mari Collingwood in the horror film The Last House on the Left (2009). She grew up in California and began acting at an early age, appearing in many minor roles in both films and television shows, before rising to fame in 2004, after playing the title role in the television series Darcy's Wild Life (2004-06) and Sarah Borden in Summerland (2004). Paxton's other films include Aquamarine (2006), Return to Halloweentown (2006), Sydney White (2007), Superhero Movie (2008), and The Innkeepers (2011). In 2017, Paxton had a guest appearance in David Lynch's Twin Peaks revival series.

I guess I can't live without Netflix because I would have nothing to do. All I do is sit home and watch movies.

The more comedic roles come easier to me though because I see myself as a silly, easy-going person.

People would be surprised to know that I've gone to regular school my whole life and I don't have one friend who is an actor!

I'm terrified to go in lakes because you can't see the bottom, and not knowing what's there watching you is really scary to me.

I'm always looking for a new thing that really terrifies me that I think I can't do it and accomplish that.

When I was 12 I cried to my mom, because I never got my letter to Hogwarts.

I think that no matter what you're doing as a teenager, you're going to be presented with peer pressure.

Acting was my after-school activity. I never planned on growing up and becoming an actor.

I didn't even get a computer till I was 16, so I didn't have Internet when I was in middle school and beginning of high school. I didn't think to be looking things up and looking at message boards saying whether people liked me or not.

All the women in my family are extremely strong.

When I was a lot younger, my parents raised me watching classic movies.

I can't live without my iPhone.

I Can, Iphone, Live

I definitely try and wash my face twice a day, and I never go to bed with my makeup on. I mostly just wash my face and try to not touch my face because that's when you get pimples.

I got started as an actress doing musical theater, and I always loved 'Grease' and 'West Side Story,' and all those kind of movies.

I like food way too much to not eat.

I don't necessarily not believe in ghosts, but I've never seen a ghost. A ghost has never jumped out and been like, 'Hey, how's it going?

My family has always supported me completely and kept me grounded. I never got lost in child Hollywood actor weirdness.