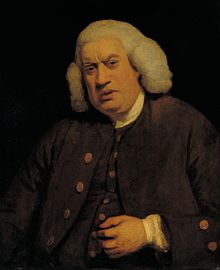 Samuel Johnson (18 September 1709 [OS 7 September] – 13 December 1784), often referred to as Dr. Johnson, was an English writer who made lasting contributions to English literature as a poet, essayist, moralist, literary critic, biographer, editor and lexicographer. He was a devout Anglican and a generous philanthropist. Politically, he was a committed Tory. The Oxford Dictionary of National Biography describes Johnson as "arguably the most distinguished man of letters in English history". He is also the subject of James Boswell's The Life of Samuel Johnson, described by Walter Jackson Bate as "the most famous single work of biographical art in the whole of literature".

Every man who attacks my belief, diminishes in some degree my confidence in it, and therefore makes me uneasy; and I am angry with him who makes me uneasy.

Turn on the prudent ant thy heedful eyes. Observe her labors, sluggard, and be wise.

A vow is a snare for sin

No government power can be abused long. Mankind will not bear it. . . . There is a remedy in human nature against tyranny, that will keep us safe under every form of government.

Sorrow is the mere rust of the soul. Activity will cleanse and brighten it.

Friendship, like love, is destroyed by long absence, though it may be increased by short intermissions. What we have missed long enough to want it, we value more when it is regained; but that which has been lost till it is forgotten will be found at last with little gladness, and with still less if a substitute has supplied the place.

We have now learned that rashness and imprudence will not be deterred from taking credit; let us try whether fraud and avarice may be more easily restrained from giving it.

The feeling of friendship is like that of being comfortably filled with roast beef; love, like being enlivened with champagne.

Wit will never make a man rich, but there are places where riches will always make a wit.

He that hopes to look back hereafter with satisfaction upon past years must learn to know the present value of single minutes, and endeavour to let no particle of time fall useless to the ground.

Whoever desires, for his writings or himself, what none can reasonably contemn, the favour of mankind, must add grace to strength, and make his thoughts agreeable as well as useful. Many complain of neglect who never tried to attract regard.

When a language begins to teem with books, it is tending to refinement; as those who undertake to teach others must have undergone some labour in improving themselves, they set a proportionate value on their own thoughts, and wish to enforce them by efficacious expressions; speech becomes embodied and permanent; different modes and phrases are compared, and the best obtains an establishment. By degrees one age improves upon another.

Gaiety is to good-humor as animal perfumes to vegetable fragrance. The one overpowers weak spirits, the other recreates and revives them. Gaiety seldom fails to give some pain; good-humor boasts no faculties which every one does not believe in his own power, and pleases principally by not offending.

There will always be a part, and always a very large part of every community, that have no care but for themselves, and whose care for themselves reaches little further than impatience of immediate pain, and eagerness for the nearest good.

Our minds, like our bodies, are in continual flux; something is hourly lost, and something acquired. . . . Do not suffer life to stagnate; it will grow muddy for want of motion: commit yourself again to the current of the world.

Some claim a place in the list of patriots, by an acrimonious and unremitting opposition to the court. This mark is by no means infallible. Patriotism is not necessarily included in rebellion. A man may hate his king, yet not love his country.

Vulgar and inactive minds confound familiarity with knowledge, and conceive themselves informed of the whole nature of things, when they are shown their form or told their use.

In writing, as in life, faults are endured without disgust when they are associated with transcendent merit, and may be sometimes recommended to weak judgments by the lustre which they obtain from their union with excellence; but it is the business of those who presume to superintend the taste or morals of mankind to separate delusive combinations, and distinguish that which may be praised from that which can only be excused.

It is man's own fault, it is from want of use, if his mind grows torpid in old age.