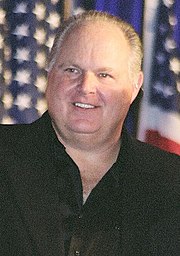 Rush Hudson Limbaugh III (/ˈlɪmbɔː/ LIM-baw; born January 12, 1951) is an American radio talk show host and conservative political commentator. He currently resides in Palm Beach, Florida, where he broadcasts The Rush Limbaugh Show. According to December 2015 estimates by Talkers Magazine, Rush Limbaugh has a cume (cumulative weekly audience) of around 13.25 million unique listeners (listening for at least five minutes), making his show the most listened-to talk-radio program in the US.

Everybody thinks America's headed the wrong direction. There's a reason for it. We're where we are because of policies implemented by Obama Barack Obama and the Democrat Party.

How one election has exposed the true dire straits of the Democrat Party. It really is profound.

The Republican Party clearly is not interested in winning. And if you want to be even more specific than that, it is paramountly obvious that they're not even interested in defeating the Democrats.

That's all global warming ever was. For the scientists involved in it, it was a living. You go out and promote what the leftists wanted to hear, and you got grant money. And if you run around and really sound like you believe it, then they're gonna make you a star. And if you're Algore and you realize you can capitalize on your vice presidency, you can become a multimillionaire spreading this hoax, which he has done.

If you think that people today, like Hollywood, are ever gonna sing [Donald] Trump's praises, it's never gonna happen. It's only going to get worse. And they know it at the White House. They're not expecting these people to be won over. That's not why Trump's doing anything he's doing. They don't expect the establishment types to one day say, "You know what? You're right, Mr. Trump, this is great. We like what you're doing. " It's never gonna happen. They don't expect that to happen.

The story is whether or not the villains, in the eyes of the media, will win or can be stopped. But when you change the dynamic and make it [Donald] Trump versus Hillary [Clinton]? Well, we already know the media has already once gotten caught up and captured and totally engrossed in the Trump story 'cause they don't know how it's gonna end day to day.

The way [Donald Trump] is dealing with this now is to say (paraphrasing), "I don't want these A-listers here. I'm not asking these people to perform. "

It seems from Pope Francis, immigrants, anybody who doesn't live here in America, has an automatic right to come here just because there's no other place like it on earth. And what is never discussed is how it got so special. How did it happen? Why is it so prosperous? Why is it so free?

Look, folks, everybody knows we're not gonna kick these DREAMers out of the country. I know that a lot of people think that we should have no mercy here on. . . "Mercy" is the wrong word. That, if we're gonna have border security, we're gonna have border security. If you're illegal and you're here illegally, you gotta go back and try to get in legally. I understand that.

Four states where [Democrats] have the governorship and both houses of the legislature. That's it. They have lost seats. They are not gonna win the House and Senate back any time soon. They don't have a prayer. Even if the Republicans implode, the numbers just work against them. They got too many seats that they have to defend.

A Republican establishment member in the media would be David Brooks in the New York Times, the so-called conservative columnist. He's basically a moderate. He favors big government if run by the people he thinks are smart. He's not crazy about conservatives.

Hillary's [Clinton] got some problems with Millennials.

I think the attitude needs to be: We need to defeat Liberals, defeat them, defeat them. Not accommodate them. Not try to persuade them. If they come along of their own volition, fine. We accept them. But they are the epitome of bigotry and prejudice.

We've even lost the definition of immigration. "Immigration" today, if you listen to the left, equals anybody who wants to come into the country should be allowed. That's not what immigration is. That's illegal immigration, and we ought to all oppose it.