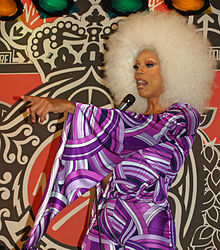 RuPaul Andre Charles (born November 17, 1960) is an American drag queen, actor, model, singer, songwriter, television personality, and author. Since 2009, he has produced and hosted the reality competition series RuPaul's Drag Race, for which he received two Primetime Emmy Awards in 2016 and 2017. RuPaul is considered to be the most commercially successful drag queen in the United States. In 2017, he was included in the annual Time 100 list of the most influential people in the world.

Life is about using the whole box of crayons.

The main thing that motivates me is laughter, and colors, and music, and dancing! And I do all of the above every day.

Drag threatens people because it exposes and mocks identity. Because most people believe that they are what it says they are on their driver's license. But the truth is we are all born naked, and the rest is drag.

If you can't love yourself, how in the hell you gonna love somebody else?

Beauty, Being Yourself, Gonna, Love, Somebody, Strong Women

Don't be jealous of my boogie.

All sins are forgiven once you start making a lot of money.

There's not a long career span because you can't really make money doing drag for very long the way the system was set up for so many years.

It's a sort of piss-take on culture, because a drag queen is a clown - a parody of our society. It's a sarcastic spoof on culture, which allows us to laugh at ourselves - but in a way that is inclusive of everyone.

But if you deem them worthy, people deserve a second chance.

You're born naked, and the rest is drag! EVERYBODY is in drag. Whether you're a man or a woman. It just depends on how extreme you wanna go.

What other people think of me is not my business. What I do is what I do. How people see me doesn't change what I decide to do. I don't choose projects so people don't see me as one thing or another. I choose projects that excite me. I think the problem is that people refuse to understand what drag is outside of their own belief system.

No one wants a cherry pie that bites back.

Our bodies are just temporary vessels for our souls, which will go on forever. You really are an extension of the power that created the whole universe, no matter what drags you have on.

When I was a kid in San Diego, I would read fashion magazines and Interview magazine, and all of that really inspired me to create a persona. So by the time I moved to New York, in the early '80s, I'd learned how to create a persona, and I knew what my persona would be.

Excuses are for losers, and winning is for winners, like you!

Love yourself. KNOW thyself. And be mindful of your thoughts.

What other people think of me is not my business. What I do is what I do. How people see me doesn’t change what I decide to do.