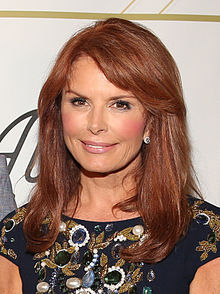 Roma Downey (born 6 May 1960) is an actress, producer, and author from Northern Ireland. She produced the mini-series, The Bible, for the History Channel and also starred in it, as Mary, the mother of Jesus. For nine seasons she played Monica, the tender-hearted angel and employee of Tess (played by Della Reese), on the CBS television series Touched by an Angel, for which she earned multiple Emmy Award and Golden Globe Award Best Actress nominations. Born in Derry, Northern Ireland and classically trained in London, she has performed on stage with the famed Abbey Theatre and has appeared both on and off Broadway. She played the leading role of Jacqueline Kennedy Onassis in the miniseries for NBC, A Woman Named Jackie (1991). Her book, Box of Butterflies is scheduled for release on March 6, 2018.

It is tradition in Ireland that you're given money for your first communion.

I think we all do have a guardian angel. I believe they work through us all the time, when we are thoughtful and good and kind to each other.

If you have donated, these children may never know your name, but they will never forget your kindness.

I love to be by the ocean and have always done my best thinking by the sea. The ebb and flow is like a brain massage and very calming. I am also inspired by seeing kindness in others. It touches me and reminds me to be kind as well.

I have been a spokesperson for Operation Smile for twenty years helping children with facial deformities. I also have worked with a children's mission called Compassion International. Both are doing amazing work for the children of the world.

Catholics Come Home inspires each of us to share God’s love with others, in order to help change the world for the better, for eternity!

If I can steal away and read something other than what I have to for my work, it's restorative.

For life to be meaningful, you must have a challenge.

I have morning prayers and a nighttime reflection. I also read the Bible daily.

I also know how to ask people for money and I have no shame about doing that.

Between stimulus and response, there is a space, and when you take time to pray or make a cuppa, you don't have to live in reaction to a situation.

I have the soul of a singer and do splendidly in the shower but the world will never hear it. Basically, I'm the only Irish person who can't carry a tune.

I pray. I try to find space to process with a walk on the beach, a hike in the hills. Nature is restorative. I also try not to overreact. I grew up in Ireland, and we are big tea drinkers, and I think it's less about the tea itself and more about the ritual and the moment to prepare.

Jesus' simple poetic words are delivered casually and gently. Jesus prefers to explain a difficult concept over time, never talking down to His followers, patiently letting the words soak in until they understand them fully.

Having played an angel for so long, you can imagine that I've been asked to endorse any number of causes over the years. Obviously I have to limit my participation with any charity, so I decided to really concentrate on my love of children.