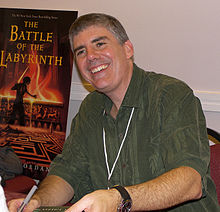 Richard Russell Riordan Jr. (/ˈraɪərdən/; born June 5, 1964), is an American author. He is known for writing the Percy Jackson & the Olympians series, about a twelve-year-old boy who discovers he is a son of Poseidon. His books have been translated into 42 languages and sold more than 30 million copies in the US. 20th Century Fox has adapted the first two books of his Percy Jackson series as part of a series of films. His books have spawned related media, such as graphic novels and short story collections.

Annabeth Thalia and I hadn't seen each other in months but between the blizzard and the thought of what we were about to do we were too nervous to talk much. Except for my mom. She talks more when she's nervous. By the time we finally got to Westover Hall it was getting dark and she'd told Annabeth and Thalia every embarrassing baby story there was to tell about me.

I felt like one of Apollo's sacred cows- slow, dumb, and bright red.

I hate it when people let me down, when things are temporary. I think that's why I want to be an architect. " "To build something permanent," I said. "A monument to last a thousand years.

Everybody loves to show up at the party once all the hard work is done.

Carter pulled out several lengths of brown twine, a small ebony cat statue, and a thick roll of paper. No, not paper. Papyrus. I remember Dad explaining how the Egyptians made it from a river plant because they never invented paper. The stuff was so thick and rough, it made me wonder if the poor Egyptians had had to use toilet papyrus. If so, no wonder they walked sideways.

Because I know you, Percy Jackson. In many ways, you are impulsive, but when it comes to your friends, you are as constant as a compass needle. You are unswervingly loyal, and you inspire loyalty. You are the glue that will unite the seven.

Unless you stop him. Perhaps next we meet. " "You'll be just as annoying?" I guessed. He fixed my with those warm brown eyes. "Or perhaps you could bring me up to speed on those modern courtship rituals. " I sat there stunned until he gave me a glimpse of a smile-just enough to let me know he was teasing. Then he disappeared. "Oh, very funny!" I yelled.

My mother says looking is the nature of wisdom.

Good job on Percy Jackson I read all of them 8 times and have listened 42 times and still not bored Thanks.

I try to craft books that are fun, that are sort of subversively educational so kids learn but they don't really feel like they're being lectured to, and I want kids to always finish one of my books and think, "That was great, where's the next one?"

Oh, obviously,” Reyna said. “Without you, I doubt Percy could find his way out of a paper bag. ” “True,” Annabeth agreed.

The world will fall, the gods will die, and I will never achieve a perfect score on this stupid machine. -Dionysus

He was dressed just like on TV, with lots of silver chains and bracelets, ripped jeans, and a black muscle shirt (Which was kind of stupid, since he didn't have any muscles).

I am never, ever, going to make things easy for you, Seaweed Brain. Get used to it.

She whirled when the monster was almost on top of her. I thought the thing in her hands was an umbrella until she cranked the pump and the shotgun blast blew the giant twenty feet backwards, right into Nico's sword. "Nice one," Paul said. "When did you learn to fire a shotgun?" I demanded. My mom blew the hair out of her face. "About two seconds ago. Percy, we'll be fine. Go!

The most dangerous flaws are those which are good in moderation.

You are one freaking awesome baboon.

Boys are usually forbidden to have any contact with the Hunters. The last one to see this camp. . . " She looked at Zoe. "Which one was it?" That boy in Colorado," Zoe said. "You turned him into a jackalope. " Ah, yes. " Artemis nodded, satisfied. "I enjoy making jackalopes.