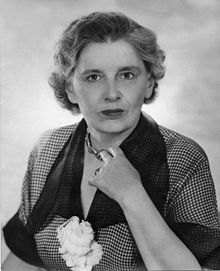 Dame Cicely Isabel Fairfield DBE (21 December 1892 – 15 March 1983), known as Rebecca West, or Dame Rebecca West, was a British author, journalist, literary critic and travel writer. An author who wrote in many genres, West reviewed books for The Times, the New York Herald Tribune, the Sunday Telegraph, and the New Republic, and she was a correspondent for The Bookman. Her major works include Black Lamb and Grey Falcon (1941), on the history and culture of Yugoslavia; A Train of Powder (1955), her coverage of the Nuremberg trials, published originally in The New Yorker; The Meaning of Treason, later The New Meaning of Treason, a study of the trial of the British Fascist William Joyce and others; The Return of the Soldier, a modernist World War I novel; and the "Aubrey trilogy" of autobiographical novels, The Fountain Overflows, This Real Night, and Cousin Rosamund. Time called her "indisputably the world's number one woman writer" in 1947. She was made CBE in 1949, and DBE in 1959, in each case, the citation reads: "writer and literary critic". She took the pseudonym "Rebecca West" from the rebellious young heroine in Rosmersholm by Henrik Ibsen.

There is no logical reason why the camel of great art should pass through the needle of mob intelligence.

All disgrace smells alike. Differences in ruin are only matters of degree.

Any writer worth his salt knows that only a small proportion of literature does nore than partly compensate people for the damage they have suffered in learning to read.

. . . it matters not what natural endowment a race may have if it prostitutes itself to the service of death.

[On Jane Austen:] To believe her limited in range because she was harmonious in method is as sensible as to imagine that when the Atlantic Ocean is as smooth as a mill-pond it shrinks to the size of a mill-pond.

Birds sat on the telegraph wires that spanned the river as the black notes sit on a staff of music.

Motherhood is neither a duty nor a privilege, but simply the way that humanity can satisfy the desire for physical immortality and triumph over the fear of death.

In these pages your imaginations, your desires, your passions are given life; Thoughts take shape that turn into dreams and our aspirations all start with a dream. Reading is where those dreams really can come true over and over again.

I believe if people are looking for the truth, the truth of the Christian religion will come out and meet them.

Time spent in a casino is time given to death, a foretaste of the hour when one's flesh will be diverted to the purposes of the worm and not of the will.

Before a war military science seems a real science, like astronomy; but after a war it seems more like astrology.

To those who fall and hurt themselves one runs with comfort; by those who lie dangerously stricken by a disease one sits and waits.

She saw she had fallen into the hands of one of those doctors who have strayed too far from apparent in the direction of the soul.

art is at least in part a way of collecting information about the universe.

It isn't only living people who die, it is great stretches of living, which can die even when the people who lived there still exist.

Mozart eliminates the idea of haste from life. His airs could not lag as they make their journey through the listener's attention; they are not the right shape for loitering. But it is as true that they never rush, they are never headlong or helter-skelter, they splash no mud, they raise no dust.

All men should have a drop of treason in their veins, if nations are not to go soft like so many sleepy pears.

All gambling is the telling of a fortune, but of a monstrously depleted fortune, empty of everything save one numerical circumstance, shorn of all such richness as a voyage across the water, a fair man that loves you, a dark woman that means you harm.