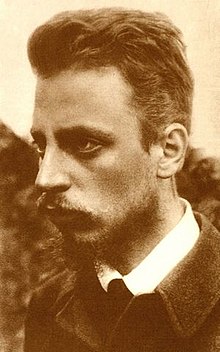 René Karl Wilhelm Johann Josef Maria Rilke, better known as Rainer Maria Rilke (German: [ˈʁaɪnɐ maˈʁiːa ˈʁɪlkə]) (4 December 1875 – 29 December 1926), was a Bohemian-Austrian poet and novelist. He is "widely recognized as one of the most lyrically intense German-language poets". He wrote both verse and highly-lyrical prose. Several critics have described Rilke's work as inherently "mystical". His writings include one novel, several collections of poetry and several volumes of correspondence in which he invokes haunting images that focus on the difficulty of communion with the ineffable in an age of disbelief, solitude and profound anxiety. These deeply existential themes tend to position him as a transitional figure between the traditional and the modernist writers.

We discover that we do not know our role; we look for a mirror; we want to remove our make-up and take off what is false and real. But somewhere a piece of disguise that we forgot still sticks to us. A trace of exaggeration remains in our eyebrows; we do not notice that the corners of our mouth are bent. And so we walk around, a mockery and a mere half: neither having achieved being nor actors.

That is why young people, who are beginners in everything, are not yet capable of love: it is something they must learn. With their whole being, with all their forces, gathered around their solitary, anxious, upward-beating heart, they must learn to love.

And now we welcome the new year, full of things that have never been

Make your ego porous. Will is of little importance, complaining is nothing, fame is nothing. Openness, patience, receptivity, solitude is everything.

Our being is continually undergoing and entering upon changes. . . . We must, strictly speaking, at every moment give each other up and let each other go and not hold each other back.

It is not inertia alone that is responsible for human relationships repeating themselves from case to case, indescribably monotonous and unrenewed: it is shyness before any sort of new, unforeseeable experience with which one does not think oneself able to cope. But only someone who is ready for everything, who excludes nothing, not even the most enigmatical will live the relation to another as something alive.

May what I do flow from me like a river, no forcing and no holding back, the way it is with children.

She followed slowly, taking a long time, As though there were some obstacles in the way; And yet: as though, once it was overcome, She would be beyond all walking, and would fly.

Long, Overcome, Overcoming, Slowly, Would Be

What we call fate does not come into us from the outside, but emerges from us.

Just as language has no longer anything in common with the thing it names, so the movements of most of the people who live in cities have lost their connection with the earth; they hang, as it were, in the air, hover in all directions, and find no place where they can settle.

Love consists of this: two solitudes that meet, protect and great each other.

I live not in dreams but in contemplation of a reality that is perhaps the future.

When anxious, uneasy and bad thoughts come, I go to the sea, and the sea drowns them out with its great wide sounds, cleanses me with its noise, and imposes a rhythm upon everthing in me that is bewildered and confused.

Embrace your solitude and love it. Endure the pain it causes, and try to sing out with it. For those near to you are distant.

Leave to your opinions their own quiet undisturbed development, which, like all progress, must come from deep within and cannot be pressed or hurried by anything.

Love consists in this, that two solitudes protect and touch and greet each other.

Away, Endure, Give, Light, Love, Mean

At no other time (than autumn) does the earth let itself be inhaled in one smell, the ripe earth; in a smell that is in no way inferior to the smell of the sea, bitter where it borders on taste, and more honeysweet where you feel it touching the first sounds. Containing depth within itself, darkness, something of the grave almost.

There exists a creature which is perfectly harmless; when it passes before your eyes you scarcely notice it and forget it again immediately. But as soon as it invisibly gets somehow into your ears, it develops there, it hatches, as it were, and cases have been known where it was penetrated even into the brain and has thriven devastatingly in that organ, like those pneumococci in dogs that gain entrance through the nose. This creature is one's neighbor.

If only we arrange our life according to that principle which counsels us that we must hold to the difficult, then that which now still seems to us the most alien will become what we most trust and find most faithful.