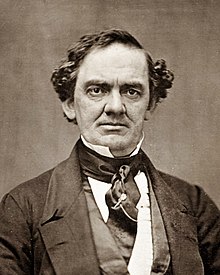 Phineas Taylor Barnum (July 5, 1810 – April 7, 1891) was an American showman, politician and businessman remembered for promoting celebrated hoaxes and for founding the Barnum & Bailey Circus (1871–2017). Although Barnum was also an author, publisher, philanthropist, and for some time a politician, he said of himself, "I am a showman by profession...and all the gilding shall make nothing else of me," and his personal aim was "to put money in his own coffers." Barnum is widely, but erroneously, credited with coining the phrase "There's a sucker born every minute."

There is no such thing in the world as luck. There never was a man who could go out in the morning and find a purse full of gold in the street to-day, and another to-morrow, and so on, day after day: He may do so once in his life; but so far as mere luck is concerned, he is as liable to lose it as to find it.

I never liked to work, I mean manual work.

Money is good for nothing unless you know the value of it by experience.

Every crowd has a silver lining.

In the United States, where we have more land than people, it is not at all difficult for persons in good health to make money.

The common man, no matter how sharp and tough, actually enjoys having the wool pulled over his eyes, and makes it easier for the puller.

The orthodox faith painted God as a revengeful being, and yet people talk about loving such a being.

Money-getters are the benefactors of our race. To them. . . are we indebted for our institutions of learning, and of art, our academies, colleges and churches.

No man ever went broke overestimating the ignorance of the American public.

You know I had rather be laughed at than not to be noticed at all.

Let your motto then always be 'Excelsior', for by living up to it there is no such word as fail.

The wonders of the ages assembled for your edification, education and enjoyment - for a price.

Every man's occupation should be beneficial to his fellow-man as well as profitable to himself. All else is vanity and folly.

The plan of "counting the chickens before they are hatched" is an error of ancient date, but it does not seem to improve by age.

As a general thing, I have not 'duped the world' nor attempted to do so. . . I have generally given people the worth of their money twice told.

Witchcraft is one of the most baseless, absurd, disgusting and silly of all the humbugs.

A penny here, and a dollar there, placed at interest, goes on accumulating, and in this way the desired result is attained.

In fact, as a general thing, money-getters are the benefactors of our race.

Whatever you do, do it with all your might. Work at it, early and late, in season and out of season, not leaving a stone unturned, and never deferring for a single hour that which can be done just as well now.