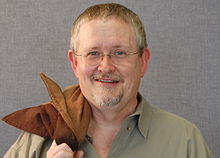 Orson Scott Card (born August 24, 1951) is an American novelist, critic, public speaker, essayist, and columnist. He writes in several genres but is known best for science fiction. His novel Ender's Game (1985) and its sequel Speaker for the Dead (1986) both won Hugo and Nebula Awards, making Card the only author to win both science fiction's top U.S. prizes in consecutive years. A feature film adaptation of Ender's Game, which Card co-produced, was released in 2013.

I love you Ender. More than ever. No matter what you decide.

Decide, Ender, Love, Love You, Matter, No Matter What

Quing-Jao: I am a slave to the gods, and I rejoice in it. Jane: A slave who rejoices is a slave indeed.

Individual human beings are all tools, that the others use to help us all survive. ” “That’s a lie. ” “No. It’s just a half truth. You can worry about the other half after we win this war.

If only we were wiser or better people, perhaps the gods would explain to us the mad, unbearable things they do.

And if you're going to criticize me for not finishing the whole thing and tying it up in a bow for you, why, do us both a favor and write your own damn book, only have the decency to call it a romance instead of a history, because history's got no bows on it, only frayed ends of ribbons and knots that can't be untied. It ain't a pretty package, but then it's not your birthday that I know of so I'm under no obligation to give you a gift.

That was interesting, to find that it wasn't hunger that caused children to become bullies on the street. The bulliness was already in the child, and whatever the stakes were, they would find a way to act as they needed to act. … Intelligence and education, which all these children had, apparently didn't make any important difference in human nature.

My father always said that government is like watching another man piss in your boot. Someone feels better but it certainly isn't you.

I've had your tears with mine, and you've had mine with yours. I think that's more intimate even than a kiss.

It is possible to have words come to your mind, and still refrain from speaking them aloud.

Isn't it possible, he wondered, for one person to love another without trying to own each other? Or is that buried so deep in our genes that we can never get it out? Territoriality. My wife. My friend. My lover. My outrageous and annoying computer personality who's about to be shut off at the behest of a half-crazy girl with OCD on a planet that I never heard of and how will I live without [her] when she's gone?

You’re not a human being until you value something more than the life of your body. And the greater the thing you live and die for the greater you are.

There is a myth that homosexuals are 'born that way,' and we are pounded with this idea so thoroughly that many people think that somebody, somewhere, must have proved it.

Unemployment is capitalism's way of getting you to plant a garden.

Sister Carlotta, I'm on a leave of absence right now. That means I've been sacked, in case you don't understand how the I. F. handles these things. ” "Sacked! A miscarriage of justice. You ought to be shot.

I realized that everything important in sci-fi showed up in the magazines first. It's the proving ground for new writers and new ideas.

There was no doubt now in Ender's mind. There was no help for him. Whatever he faced, now and forever, no one would save him from it. Peter might be scum, but Peter had been right, always right; the power to cause pain is the only power that matters, the power to kill and destroy, because if you can't kill then you are always subject to those who can, and nothing and no one will ever save you.

Among my most prized possessions are words that I have never spoken.