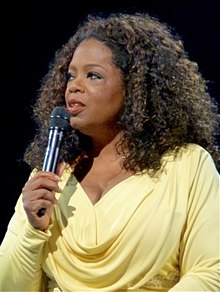 Oprah Winfrey (born Orpah Gail Winfrey; January 29, 1954) is an American media proprietor, talk show host, actress, producer, and philanthropist. She is best known for her talk show The Oprah Winfrey Show, which was the highest-rated television program of its kind in history and was nationally syndicated from 1986 to 2011 in Chicago, Illinois. Dubbed the "Queen of All Media", she is the second richest African American and North America's first multi-billionaire black person and has been ranked the greatest black philanthropist in American history. Several assessments rank her as the most influential woman in the world.

You can take from every experience what it has to offer you. And you cannot be defeated if you just keep taking one breath followed by another.

If you allow yourself to breathe into the depth, wonder, beauty, craziness, and strife everything that represents the fullness of your life you can live fearlessly. Because you come to realize that if you just keep breathing, you cannot be conquered

When I didn't have friends, I had books.

How you spend your time defines who you are.

Defines, Leadership, Spend, Time, Who You Are

Intent and service-that is my motto.

If you're sitting around waiting on somebody to save you, to fix you, to even help you, you are wasting your time because only you have the power to take responsibility to move your life forward.

My highest achievement: never shutting my heart down. Even in my darkest moments - through sexual abuse, a pregnancy at 14, lies and betrayals - I remained faithful, hopeful, and open to seeing the best in people, regardless of whether they were showing me their worst. I stayed open to believing that no matter how hard the climb, there is always a way to let in a sliver of light to illuminate the path forward.

Time isn't the enemy. Fear of change is. Accept that nothing lasts forever and you'll start to appreciate the advantages of whatever age you are now.

Real success means creating a life of meaning through service that fulfills your reason for being here.

There are still generations of people, older people, who were born and bred and marinated in it, in that prejudice and racism, and they just have to die.

Forgiveness is giving up the hope that the past could have been any different.

Understand that the right to choose your own path is a sacred privilege. Use it. Dwell in possibility.

Making other people happy is what brings me happiness. I have a blessed life, and I have always shared my life's gifts with others. I will continue to use my voice and my life as a catalyst for encouraging people to help make a difference in the lives of others.

It's time for us as a country to try to come together in ways that freedom was really meant to be.

You are where you are in life because of what you believe is possible for yourself.

A friend of mine says that perfection is a road, not a destination.

Be quiet. Part of your responsibility is to honour the quiet inside yourself so you can hear the call.