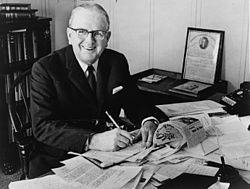 Norman Vincent Peale (May 31, 1898 – December 24, 1993) was an American minister and author known for his work in popularizing the concept of positive thinking, especially through his best-selling book The Power of Positive Thinking. He served as the pastor of Marble Collegiate Church, New York, from 1932 until his death, leading a Reformed Church in America congregation. Peale was a personal friend of President Richard Nixon. President Donald Trump attended Peale's church while growing up, as well as marrying his first wife Ivana there. Peale's ideas and techniques were controversial, and he received frequent criticism both from church figures and from the psychiatric profession.

If you paint in your mind a picture of bright and happy expectations, you put yourself into a condition conducive to your goal.

Go at life with abandon; give it all you've got. And life will give all it has to you.

Joy increases as you give it, and diminishes as you try to keep it for yourself.

Always remember, there is more strength in you than you ever realized or even imagined. Certainly nothing can keep you down if you are determined to get on top of things and stay there.

Determined, Down, Encouraging, Nothing, Stay, Strength

. . . a basic law: the more you practice the art of thankfulness, the more you have to be thankful for. This, of course, is a fact. Thankfulness does tend to reproduce in kind. The attitude of gratitude revitalizes the entire mental process by activating all other attitudes, thus stimulating creativity.

Learn to relax. Your body is precious, as it houses your mind and spirit. Inner peace begins with a relaxed body.

If you've been full of error and defeat, be done with it. Say, "By God's grace, I'm done with it," and take charge of yourself like never before. "

Live your life and forget your age.

God loves you. God doesn't want anyone to be hungry and oppressed. He just puts his big arms around everybody and hugs them up against himself.

The trouble with the average person is that he doesn't trust himself sufficiently to create and deliver ideas.

The trouble with most of us is that we would rather be ruined by praise than saved by criticism.

There are two primary forces in this world, fear and faith. Fear can move you to destructiveness or sickness or failure. Only in rare instances will it motivate you to accomplishment. But faith is a greater force. Faith can drive itself into your consciousness and set you free from fear forever.

Never allow sick attitudes to poison your thinking, nor let ill will make you ill. Avoid making your mind sore by that painful rehurting called resentment.

Any fact facing us, however difficult, even seemingly hopeless, is not so important as our attitude towards that fact. How you think about a fact may defeat you before you ever do anything about it. You may permit a fact to overwhelm you mentally before you deal with it actually. On the other hand, a confident and optimistic thought pattern can overcome or modify the fact altogether.