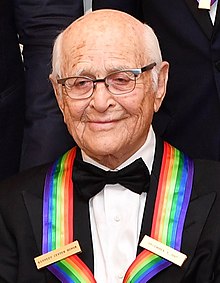 Norman Milton Lear (born July 27, 1922) is an American television writer and producer who produced such 1970s sitcoms as All in the Family, Sanford and Son, One Day at a Time, The Jeffersons, Good Times, and Maude. As a political activist, he founded the advocacy organization People for the American Way in 1981 and has supported First Amendment rights and progressive causes.

I looked at enough of American Idol in the first weeks, and they're all about humiliation. I listen to Rush Limbaugh because I find it so repulsive. There are people with a little less sophistication who watch a lot of it, because we allow things to appeal to our baser instincts. But at the same moment, give me a little choice, and I'll make a better decision, because I have that ability too. And so does everybody else.

I was writing for live television. And I said to myself, someday, soon as I can, I have got to do a situation comedy.

In the area we're discussing, leadership begins on Madison Avenue, on the desks and in the offices of people who spend hundreds of millions of dollars buying what will get them ratings.

I think what's dangerous is 24 hours a day, 335 channels, or whatever the hell there is. Too much is too much.

As a matter of fact, when people ask where my 'point of view' comes from, it was there in one of the first sketches we wrote for [Dean] Martin and [Jerry] Lewis.

It crossed our minds early on that the more an audience cared - we were working before, on average, 240, live people. If you could get them caring - the more they cared, the harder they laughed.

When I got married for the third time, and I had children from my other marriage there, that's what I said when it came time in the ceremony for me to say something. I said, "I'm grateful to everybody that participated, everybody that participated in my life that got me to this moment. And everything was dead-right because everything is right now. "

You're in the business - when you're a writer, producer, director - to get ratings.

Originally, with all the shows, we went looking for belly laughs.

When something is over, it is over.

I think if you're feeling great about where you are, everything that led up to it had to be terrific.

In this nation, leadership is dollars.

Next up [new TV stars] was [Dean] Martin and [Jerry] Lewis on 'The Colgate Comedy Hour. '

The complete control of one party over everything - I would, I think, feel the same way if it were [the Democrats in charge]. It's not the American way.

As H. L. Mencken once said, 'nobody ever when broke underestimating the intelligence of the American people. ' Our show [All in the Family] countered that witticism. I think he was wrong.

You know, you throw rocks in the lake and scientists will tell you you're raising the level of the lake, but all you get to see is the ripple.

The evidence seems clear that those business which actively serve their many constitutencies in creative, morally thoughtful ways also, over the long run, serve their shareholders best. Companies do, infact, do well by doing good.

The establishment uses that rationale all the time, and that's why we do what we do. But leadership requires some understanding that you can say no. People have base instincts, but the transcendent also appeal to them.