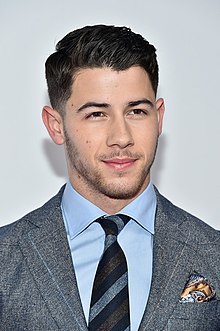 Nicholas Jerry "Nick" Jonas (born September 16, 1992) is an American singer, songwriter, actor, and record producer. Jonas began acting in theater at the age of seven, and released his debut single in 2002. He released his eponymous debut album in 2004 to little success, though it did catch the attention of Columbia Records. Jonas opted to form a band with his older brothers, Joe and Kevin, known as the Jonas Brothers. In 2005, Nick was diagnosed with Type 1 Diabetes at the age of 13. The group released their debut studio album It's About Time in 2006, through the Columbia label, which failed to achieve commercial success. After signing with Hollywood Records, the group released their self-titled second studio album in 2007, which became their breakthrough record. The band became prominent figures on the Disney Channel during this time, gaining a large following through the network, later appearing in their widely successful musical television film Camp Rock (2008).

I think I like a challenge. I try to find projects that will push me in a new way and help me grow.

Acting has always been a passion of mine, so any opportunity that allows me to do that is definitely of interest to me.

You've got to avoid situations that make you uncomfortable.

Taylor Swift is great for a night out as it involves a lot of tequila. With her it’s all about good friends and celebrating friendship, it’s such a positive environment to be a part of. She’s great.

Don't let the world around you defeat the belief within you.

I had an emotional breakdown since I really had no idea what diabetes was all about. I wondered, 'why me?' Then I asked myself, 'why not me?' and realized that I might be able to help other kids with diabetes.

I think you are the best you can be when you feel free, when you feel open. So I think keeping that mentality, keeping positive, is key.

One of the scariest things to me was, I really feel like I'm a pretty even-keeled person with a good outlook and respect level, but in that environment, deep within the character, you see how easy it is to go to that place because you're one-upping each other and it's this heavy environment filled with young men trying to make an impression. It's dangerous. It's something that I became very conscious of afterwards.

I think that this stage in my life is really, for a lot of reasons, pretty incredible. Being a solo artist and trying to take these bold steps on my own.

[Songwriting is] something that I own - it's my property, it's my music, it's my voice.

I've always been a bit insecure about my smile, but its days like these where all I wanna do is smile.

I think the community that you're in really can define your ability to be at peace with your circumstances.

I'm not going to lie about it. I carry a satchel too. It's like a man purse. It's a whole thing.

As a songwriter, the minute you start having sex, you can totally see the difference in the writing. You become an adult - that's kind of the whole backbone of it, really, your identity as a person and what sex means to you.

I just want to keep pushing things and growing, and we'll see what happens.

Jonas Brothers fans are a force to be reckoned with.

I think the differences between men and women, it's kind of hard to define what those are and the challenges, what they are. I think there are challenging things for everybody.