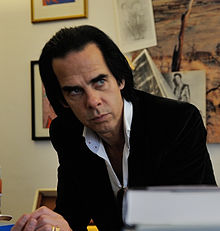 I have a very strange relationship in general with women around my music. There's some that understand it and some that think there should be a law against it.

I was about 12 years old and I was sitting watching the television and it was some kind of talent show, you know, and on marches this monkey, this ape, in a pair of red-checked trousers with a little matching jacket holding a ukelele and it started jigging around playing it, and it was looking straight into the camera, straight at me, and I remember thinking, that's it, that'll be me, you know, that'll be me.

Musicians are at the bottom of the creative pyramid and authors are at the top, and many people think it's unacceptable for someone to attempt to jump from the bottom to the top of the pyramid.

I always thought my records were number one; it's just the charts didn't think so.

We cannot afford to be idle. To act on a bad idea is better than to not act at all. Because the worth of the idea never becomes apparent until you do it. Sometimes this idea can be the smallest thing in the world, a little flame that you hunch over and cup with your hand, and pray will not be extinguished by all the storm that howls about it. If you could hold onto that flame, great things could construct around it, that are massive and powerful and world changing, all held up by the tiniest of ideas.

My responsibility as an artist is to turn up at the page or the piano or the microphone. The rest is up to God.

To my undying shame, I do read reviews. I don't read them all, but I like to get some kind of idea how things are going.

The more information you have, the more human our heroes become and consequently the less mysterious and godlike. They need to be godlike.

I have a particular dislike for children's films. I'm way past the novelty aspect.

Songs need to have the ability to change and to grow for sure. They take on lives of their own. Some songs just don't have that capacity. They're locked within a period of time. And as soon as you take them out of that period of time, they die very quickly.

The problem with books, now that I've written one, is that the idea of adaptation is so much easier than sitting down to write something new.

I'm a big fan of teatowels and am always on the lookout for a good one.

Into the mercy seat I climb My head is shaved, my head is wired And like a moth that tries To enter the bright eye I go shuffling out of life Just to hide in death awhile And anyway I never lied.

There are methods to creating a mayhem that sounds different from your usual mayhem. Because mayhem and a heavy drum backbeat end up sounding like Green Day or something. But if you put a different beat within it to create some air and lightness, the chaos comes through better.

Most of the time, feelings just seem to get in the way. They're a luxury for the idle, a bourgeois concept. Feelings are overrated.

I don't think Hollywood makes many good films anymore. How many directors can you really trust to have an artistic vision, not a corporate vision or a watered-down communal one?

Polly Jean, I love you. I love the texture of your skin, the taste of your saliva, the softness of your ears. I love every inch and every part of your entire body. From your toes and the beautifully curved arches of your feet, to the exceptional shade and warmth of your dark hair. I need you in my life, I hope you need me too.