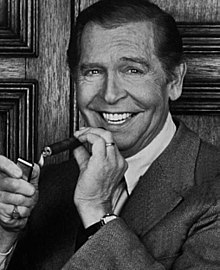 Milton Berle (born Mendel Berlinger; July 12, 1908 – March 27, 2002) was an American comedian and actor. Berle’s career as an entertainer spanned over 80 years, first in silent films and on stage as a child actor, then in radio, movies and television. As the host of NBC's Texaco Star Theater (1948–55), he was the first major American television star and was known to millions of viewers as "Uncle Miltie" and "Mr. Television" during TV's golden age.

In Washington, a man gets up to speak and doesn't say a thing, and the other men disagree with him for three hours.

Why are we honoring this man? Have we run out of human beings?

In the suburbs it's hard to buy your Christmas gifts early in the year. You never know who your friends will be in December.

You're aging when your actions creak louder than your words.

At the Christmas party, the secretary with the long red hair ate three pickles, and four salesmen panicked.

They've got plastic Christmas trees now. They're hard to tell from the real aluminum ones.

The Post Office is very careful nowadays. When they get a package marked "Fragile," they throw it underhand.

I take New Years with a grain of salt and three aspirins.

Radio. . . that wonderful invention by which I can reach millions of people. . . who fortunately can't reach me.

Who says we didn't have controversial subjects on TV back in my time? Remember Bonanza? It was about three guys in high heels living together

My doctor told me that jogging could add years to my life. I think he was right. I feel ten years older already.

I bought my mother-in-law a beautiful chair for Christmas, but she won't let me plug it in.

My son gave me a nice bottle of cologne - Eau de Owe.

I really doubt whether evolution ever works, how then come Mothers have only two hands

On Valentine's Day, I wired flowers for my mother-in-law, but she found the fuse.

I know why superman left krypton. Earth was the only place where he could get steriods!

Poverty is not a disgrace, but it's terribly inconvenient.

I gave my wife a gift certificate for Christmas. She ran out to exchange it for a bigger size.

If evolution really works, how come mothers only have two hands?

It's amazing how fast later comes when you buy now!