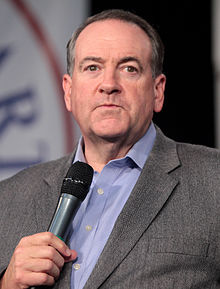 Michael Dale Huckabee (born August 24, 1955) is an American politician, Christian minister, author, and commentator who served as the 44th governor of Arkansas from 1996 to 2007. He was a candidate in the United States Republican presidential primaries in both 2008 and 2016. He won the 2008 Iowa Republican caucuses and finished second in delegate count and third in both popular vote and number of states won, behind John McCain and Mitt Romney.

I'll release my tax returns when Barack Obama releases his college transcripts and the copy of his admission records to show whether he got any loans as a foreign student. When he releases that, talk to me about my tax returns.

You don't just give the executive branch unlimited resources, unlimited power. Our founders were very concerned about too much power being invested in any one, in any branch. The balance of power is fundamental to our system.

I support workplace clean air. But a federal ban on smoking would mean that you couldn't smoke in your own home. I don't care what people do in their home.

I've said that, that I've felt like as Christians and particularly even as Republicans, we needed to address issues that touched the broader perspective, and that included disease, hunger, poverty, homelessness, the environment.

This room is a testimony that there are men who want to be a man for God and a man of God.

It doesn't embarrass me one bit to let you know that I believe Adam and Eve were real people.

Doesn't matter whether it's a teen girl who's pregnant, hasn't told her parents, or an elderly couple dealing with one of them being diagnosed with Alzheimer's. Those are real people to me. Those are the people I dealt with every single day.

I'm a strong advocate for music. I think guitars are wonderful.

John McCain will follow the fanatics to their caves in Pakistan or to the gates of hell. What Obama wants to do is give them a place setting at the table.

Divorce is one of the key predictors of poverty for a child growing up in a home that's broken.

Marriage is not defined in the federal Constitution at all; it's a matter for the states. And applying the Fourteenth Amendment to the equality of men and women and their relationship in marriage is totally different than redefining marriage. Here is the overreach of the judiciary. This, if allowed to stand without any congressional approval, without any kind of enabling legislation, is what Jefferson warned us about. That's judicial tyranny.

We are a nation of faith, and we are stewards of God's world.

I'm still one who says that we can get rid of the Internal Revenue Service if we would pass the fair tax, which is a tax on consumption rather than a tax on people's income, and move power back where the founders believed it should have been all along.

The most powerful demonstration of leadership is not a clenched fist of brute force but an open hand of humble assistance.

My purpose is to make sure that we protect every American, wherever that American is, and if an American is calling out for help, whether it's in Benghazi or at the border, then we ought to be able to answer it.

I think that I would have made a fine president. But it really came down for me to a very personal, a very intimate and a spiritual decision. I don't rule anything out for the long-term future.

Five people in robes said they are bigger than the voters of California and Congress combined. And bigger than God. May He forgive us all.

A lot of people are talking about defunding planned parenthood, as if that's a huge game changer. I think it's time to do something even more bold. I think the next president ought to invoke the Fifth, and Fourteenth Amendments to the constitution now that we clearly know that that baby inside the mother's womb is a person at the moment of conception.