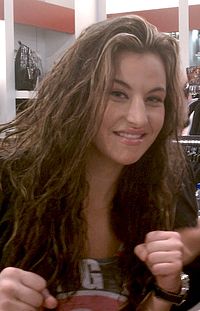 Miesha Theresa Tate (/ˈmiːʃə/ MEE-shə; born August 18, 1986) is an American mixed martial arts pundit and former mixed martial artist who competed in the Ultimate Fighting Championship (UFC) and is a former UFC Women's Bantamweight Champion. Primarily known for her grappling ability, Tate became a wrestler while attending Franklin Pierce High School in Tacoma, Washington and won a state championship during her senior year in 2005. She began her professional mixed martial arts (MMA) career in 2007, and won the bantamweight championship of the Freestyle Cage Fighting promotion in 2009. Tate gained increased recognition in 2011, when she won the Strikeforce Women's Bantamweight Championship. She has also won a silver medal in the FILA Grappling Championships.

Failure isn't failure unless you just stop with that.

I train twice a day and I make sure I eat right. I'm an avid tea drinker and I enjoy the benefits of drinking MateFit. It gives me energy, speeds up my metabolism and helps me shed excess water weight. I also do everything from MMA sparring to strength and conditioning. I make sure to do a combination of different things with my training.

What feeds a fighters soul is victory.

You always have to try to move forward with a positive connotation in the future.

If you weren’t pretty, it wouldn’t matter what you said or didn’t say. That’s why you’re getting this attention.

Make excuses to work out. Go for walks and enjoy scenery. You'd be surprised how many calories you can burn during the day if you just make an effort and become more aware. Also remember to start slow, don't go into it too hard if you are just starting.

I think we've broken a lot of barriers and kind of shattered our "glass ceiling" that was there for women. There are so many great fighters and we've proved a lot of people wrong. A lot of the times our fights are the best fights on the card.

Make sure you are doing something you love to do when working out. Nobody likes to work, so when you do choose a workout, make it something you enjoy doing. You won't stick with it if you hate it and if it feels like work. Find something fun.

Gradually work your way towards the hard stuff. That will help you avoid injury and you'll be most likely to stick with it.

I've been fighting for nine years and in the beginning there was a lot of backlash and non-supporters of women fighters. We could never find many women fighters and when we did sometimes we were put on the card for the wrong reasons. It was frustrating. When I'd go train in gyms, it seemed like the guys at the gym were skeptical and didn't think I was as serious as they were because I was a woman, but today things are different.