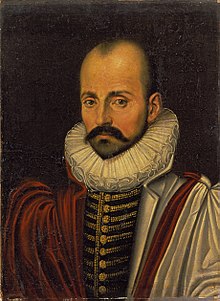 Michel Eyquem de Montaigne, Lord of Montaigne (/mɒnˈteɪn/; French: [miʃɛl ekɛm də mɔ̃tɛɲ]; 28 February 1533 – 13 September 1592) was one of the most significant philosophers of the French Renaissance, known for popularizing the essay as a literary genre. His work is noted for its merging of casual anecdotes and autobiography with serious intellectual insight; his massive volume Essais contains some of the most influential essays ever written.

The laws of conscience, though we ascribe them to nature, actually come from custom.

My errors are by now natural and incorrigible; but the good that worthy men do the public by making themselves imitable, I shall perhaps do by making myself evitable.

There is no knowledge so hard to acquire as the knowledge of how to live this life well and naturally.

Kings and philosophers defecate, and so do ladies.

Truly man is a marvelously vain, diverse, and undulating object. It is hard to found any constant and uniform judgment on him.

Such as are in immediate fear of a losing their estates, of banishment, or of slavery, live in perpetual anguish, and lose all appetite and repose; whereas such as are actually poor, slaves, or exiles, ofttimes live as merrily as other folk.

Health is a precious thing, and the only one, in truth, meriting that a man should lay out not only his time, sweat, labor and goods, but also life itself to obtain it.

But the touch or company of any man whatsoever stirreth up their heat, which in their solitude was hushed and quiet, and lay as cinders raked up in ashes.

Physicians have this advantage: the sun lights their success and the earth covers their failures.

A man must learn to endure patiently what he cannot avoid conveniently.

We endeavor more that men should speak of us, than how and what they speak, and it sufficeth us that our name run in men's mouths, in what manner soever. It stemma that to be known is in some sort to have life and continuance in other men's keeping.

Lying is a terrible vice, it testifies that one despises God, but fears men.

Heart, Too Much, Injustice, Natural, Against

In his commerce with men I mean him to include- and that principally- those who live only in the memory of books. By means of history he will frequent those great souls of former years. If you want it to be so, history can be a waste of time; it can also be, if you want it to be so, a study bearing fruit beyond price.

I do not correct my first imaginings by my second--well, yes, perhaps a word or so, but only to vary, not to delete. I want to represent the course of my humors and I want people to see each part at its birth.

In the examples that I here bring in of what I have [read], heard, done or said, I have refrained from daring to alter even the smallest and most indifferent circumstances. My conscience falsifies not an iota; for my knowledge I cannot answer.

The art of dining well is no slight art, the pleasure no slight pleasure.