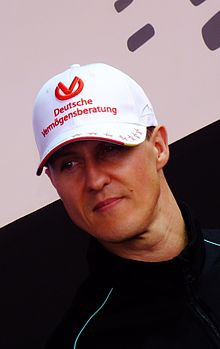 Michael Schumacher (German pronunciation: [ˈmɪçaʔɛl ˈʃuːmaxɐ] ( listen); born 3 January 1969) is a retired German racing driver who raced in Formula One for Jordan Grand Prix, Benetton and Ferrari, where he spent the majority of his career, as well as for Mercedes upon his return to the sport. Widely regarded as one of the greatest Formula One drivers ever, and regarded by some as the greatest of all time, Schumacher is the only driver in history to win seven Formula One World Championships, five of which he won consecutively. The most successful driver in the history of the sport, Schumacher holds the records for the most World Championship titles (7), the most Grand Prix wins (91), the most fastest laps (77) and the most races won in a single season (13), and according to the official Formula One website, Schumacher is "statistically the greatest driver the sport has ever seen".

I've always believed that you should never, ever give up and you should always keep fighting even when there's only a slightest chance.

Ferrari's only objective is to be at the top, in other words, to compete for the World Championship. That's our right. Winning is another matter. It wouldn't be a disgrace to come in second after a tough fight.

You win a race, the next race it’s a question mark. Are you still the best or not? That’s what is funny. But that’s what is interesting. And that’s what is challenging. You have to prove yourself every time.

I don't feel like promising big things to my fans. I'm not thinking about victory at all. I'll do my best to get on the podium at least, although I must admit I feel fairly pessimistic.

The first thing, when I got the money, I knew I would support somebody. And the person I supported was my family. Because we were really in debt with the money. And - so I gave to my father this suitcase full of money. And he couldn't believe it. And that was something very special.

I decided on a vision. I think I maybe join Toyota at the midpoint of a project, whose long-term goal is winning world championships. Also I have my big ambition, the drivers' world championship. That is not abandoned - entirely the opposite. I am young enough and motivated enough to make a new start in order to reach this goal.

Nascar will certainly not be one of my challenges in the future.

I like working in a team, and at Ferrari there is always good cooperation.

Technology has certainly reduced performance differences among drivers. Whereas a talented driver could get a half-second out of every lap in the past, nowadays talent makes up for only about one or two tenths of a second. But the driver is still the key factor.

Psychologically speaking, it's very important to be in good shape. I work in a sport that requires you to react quickly and be in excellent shape. Besides, things don't get easier as you get older.

The switch from ten-cylinder to eight-cylinder engines means that each manufacturer has to redevelop its power train. Not all will manage to successfully combine performance with reliability the first time around. That could shake things up a bit when it comes team hierarchy.

If I didn't even stand a chance of winning races and competing for the title, I don't think I would be that interested in continuing my career.

I like to share my life, and spend time with someone I love. That has worked 100 per cent with my wife.

When you are part of a community for 14 years, it inevitably shapes you. I will always have a part of Ferrari beside me; a part of my heart will always be red.

The more precisely I can drive, the more I enjoy myself.

Enjoy, I Can, Precisely, Drive

If you imagine how many years the other guys have been in my position Im in now, they have been motivated to get back and challenge the leaders,. . . Theres no reason not to be motivated and I look forward very much to challenging again.

I cant really imagine life without Formula One.

My time with Ferrari was wonderful. I have found friends and had experiences that I would not want to be without.

I have what you might call the South Pole and the North Pole. I have my team and my work, which I do on one side, and I have my family and my home on the other side. Both have nothing really to do with each other.

I have to say it's been tough to leave the Ferrari family, which has been a big part of my career.