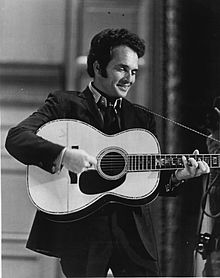 Merle Ronald Haggard (April 6, 1937 – April 6, 2016) was an American country singer, songwriter, guitarist, and fiddler. Along with Buck Owens, Haggard and his band the Strangers helped create the Bakersfield sound, which is characterized by the twang of Fender Telecaster and the unique mix with the traditional country steel guitar sound, new vocal harmony styles in which the words are minimal, and a rough edge not heard on the more polished Nashville sound recordings of the same era.

'Cause I was already a smoker, it was easy to get addicted. The one thing that they don't teach you about marijuana is how addictive it is.

At my age, I don't buy but a half a loaf of bread, you know?

Well, I'm kinda like George Carlin. I think that there ought to be a time where everybody should have all the drugs they want and there'd be nobody in charge, sort of like. . . now!

If I hear another line dance song I think I'm going to puke.

I'll tell you what the public likes more than anything, it's the most rare commodity in the world - honesty.

Read about some squirrelly guy who claims that he just don't believe in fighting, and I wonder how long the rest of us can count on being free.

When you get to readin' about where the music and John Steinbeck and all those people like that come from, the further you go the more interesting it becomes.

The Captain just gave us our orders, and Mom we must carry them through. I'll finish this letter first chance I get, but for now I'll just say I love you.

Everybody likes Johnny Cash. I think the sad part of it is his health is givin' him problems.

By the time you get close to the answers, it's nearly all over.

There's one thing I never did do, and that was stink.

Willie Nelson's the one who told me the reason it costs so much to get divorced is because it's worth it.

We're turning into the society that is accepting the force-feed. I don't quite understand why we're going for the things we're going for. There's no process of elimination anymore in music. They have these grooming schools, these things, and they're turning out these clones, and the music is sounding so refined that it's not even interesting.

Despite of all my Sunday learnin', toward the bad I kept turning.

This is America. We're proud. We're not afraid of a bunch of terrorists. But this government is all about terror alerts and scaring us at airports. We're changing the Constitution out of fear. We spend all our time looking up each other's dresses. Fear's the only issue the Republican Party has. Vote for them, or the terrorists will win. That's not what Reagan was about. I hate to think about our soldiers over in Iraq fighting for a country that's slipping away.

Running down on a way of life our fighting men have fought and died to keep. If you don't love it, leave it.

Heaven knows that alcohol is the worst thing in the world, but it's debatable whether cocaine is worse than caffeine or whether it's the same thing and they just changed the name.