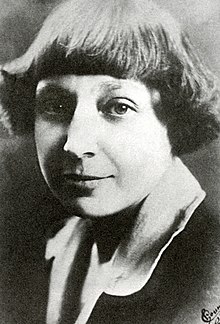 Marina Ivanovna Tsvetaeva (Russian: Мари́на Ива́новна Цвета́ева, IPA: [mɐˈrʲinə ɪˈvanəvnə tsvʲɪˈtaɪvə]; 8 October [O.S. 26 September] 1892 – 31 August 1941) was a Russian and Soviet poet. Her work is considered among some of the greatest in twentieth century Russian literature. She lived through and wrote of the Russian Revolution of 1917 and the Moscow famine that followed it. In an attempt to save her daughter Irina from starvation, she placed her in a state orphanage in 1919, where she died of hunger. Tsvetaeva left Russia in 1922 and lived with her family in increasing poverty in Paris, Berlin and Prague before returning to Moscow in 1939. Her husband Sergei Efron and her daughter Ariadna Efron (Alya) were arrested on espionage charges in 1941; and her husband was executed. Tsvetaeva committed suicide in 1941. As a lyrical poet, her passion and daring linguistic experimentation mark her as a striking chronicler of her times and the depths of the human condition.

The one that burned the hottest is the first to die.

I am a moonbeam, free to go whenever I choose.

What shall I do, singer and first-born, in a world where the deepest black is grey, and inspiration is kept in a thermos? with all this immensity in a measured world?

Wings are freedom only when they are wide open in flight. On one's back they are a heavy weight.

After a sleepless night the body gets weaker, It becomes dear and not yours - and nobody's. Just like a seraph you smile to people And arrows moan in the slow arteries. After a sleepless night the arms get weaker And deeply equal to you are the friend and foe. Smells like Florence in the frost, and in each Sudden sound is the whole rainbow. Tenderly light the lips, and the shadow's golden Near the sunken eyes. Here the night has sparked This brilliant likeness - and from the dark night Only just one thing - the eyes - are growing dark.

An amazing observation: it is precisely for feelings that one needs time, not for thought. . . . Feelings, obviously, are more demanding than thought.

However much you feed a wolf, it always looks to the forest. We are all wolves of the dense forest of Eternity.

I am a shadow’s shade, a lunatic, perhaps, Of two dark moons.

I opened my veins. Unstoppably life spurts out with no remedy. Now I set out bowls and plates. Every bowl will be shallow. Every plate will be small. And overflowing their rims, into the black earth, to nourish the rushes unstoppably without cure, gushes poetry.

Who sleeps at night? No one is sleeping. In the cradle a child is screaming. An old man sits over his death, and anyone  young enough talks to his love, breathes  into her lips, looks into her eyes.

My favorite mode of communication is in the world beyond: a dream, to see in a dream. My second favorite is correspondence.

Think about me lightly, think of me, and forget.

My verses are my diary. My poetry is a poetry of proper names.