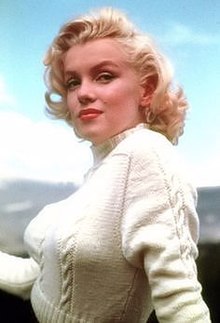 Marilyn Monroe (born Norma Jeane Mortenson; June 1, 1926 – August 5, 1962) was an American actress, model, and singer. Famous for playing comic "blonde bombshell" characters, she became one of the most popular sex symbols of the 1950s and was emblematic of the era's attitudes towards sexuality. Although she was a top-billed actress for only a decade, her films grossed $200 million by the time of her unexpected death in 1962. More than half a century later, she continues to be a major popular culture icon.

Men are climbing to the moon, but they don’t seem interested in the beating human heart.

I don't want to make money, I just want to be wonderful.

I guess I have always been deeply terrified to really be someone's wife since I know from life one cannot love another, ever, really.

What good is it being Marilyn Monroe? Why can't I just be an ordinary woman?

The chief drawback with men is that they are too talkative.

I enjoy acting when you really hit it right.

At twelve I looked like a girl of seventeen. My body was developed and shapely. I still wore the blue dress and the blouse the orphanage provided. They made me look like an overgrown lummox.

I wanted to ask a thousand questions, but there was no one to ask. Besides I knew that people only told lies to children-lies about everything from soup to Santa Claus.

Important people are much more interesting when they are drunk and seem much more like human beings.

I remember when I got the part in Gentlemen Prefer Blondes. Jane Russell - she was the brunette in it and I was the blonde. She got $200,000 for it, and I got my $500 a week, but that to me was, you know, considerable. She, by the way, was quite wonderful to me. The only thing was I couldn't get a dressing room. Finally, I really got to this kind of level and I said, "Look, after all, I am the blonde, and it is Gentlemen Prefer Blondes!" Because still they always kept saying, "Remember, you're not a star. " I said, "Well, whatever I am, I am the blonde!

I am trying to find myself. Sometimes that's not easy.

I knew I belonged to the public and to the world, not because I was talented or even beautiful, but because I had never belonged to anything or anyone else.

I wish I knew why I am so anguished.

It's better for the whole world to know you, even as a sex star, than never to be known at all.

Boys think girls are like books, If the cover doesn't catch their eye they won't bother to read what's inside".

The truth is, I've never fooled anyone. I've let men sometimes fool themselves.

I don't look at myself as a commodity, but I'm sure a lot of people have.

I am involved in a freedom ride protesting the loss of the minority rights belonging to the few remaining earthbound stars. All we demanded was our right to twinkle.