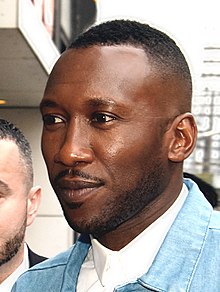 Mahershalalhashbaz Ali Gilmore (/məˈhɜːrʃələ/; né Gilmore; February 16, 1974), known professionally as Mahershala Ali, is an American actor and rapper. Ali began his career as a regular on television series, such as Crossing Jordan and Threat Matrix, before his breakthrough role as Richard Tyler in the science fiction series The 4400.

I grew up in church. My mom's a minister, and my grandmother was an ordained minister. I was always very mindful of the presence of a greater being I call God.

Gay, straight - whatever - adolescents in high school and coming out of junior high, that's such a difficult, awkward period and kids can be so cruel and mean.

Hold tight to the mentality of being a student, meaning hold on to curiosity and approach life as a student.

Again, having - fortunately having never been in trouble. And eventually I found out that I was on a watch list.

I think what I've learned from working on "Moonlight" is we see what happens when you persecute people. They fold into themselves.

I was fortunately able to avoid getting into any trouble with police. There was - I remember I was 12, and I did something really (laughter) - a couple of friends, Cinco de Mayo - we were off school, and we saw some people looking like they were having a party. And we had a little bit too much time on our hands, and so we figured, as kids, a great idea would be to throw some things over the fence and hit all these people with stuff, like eggs and everything.

I was always sort of ahead of myself in some way, shape or form and trying to envision how to get further along and closer to fulfilling that dream of being of being free and having a creative agency, so to speak.

My father had a lot to do with me thinking about acting, though he never saw me act. He passed away probably - he passed away as I was doing my first play, but I just think being exposed to it and being around it. It wasn't something that I ever thought I couldn't do because I grew up around it.

When you graduate is when you start to find yourself looking at the information in the audition breakdown and it says tall black African - or African-American built such and such. And you start seeing these character descriptions and seeing that, oh, you're only going in for the ones that are described as your look.

This is 2003, 2004. And then I started - after the Patriot Act, I would always get my financial packages in the mail and they would just be opened. And it was like, what is going on here?

My parents were kids when I was born. My mother was 16. My father was 17, and they got married in high school. And they split a few years later. When they split was when all that was happening also, and he - they were just coming into themselves. But they remained friends.

I feel like [terrorism] acts are un-Islamic. So to see that happen and somebody do that in the name of God, it just - and the religion that you practice, it just - it hurts your heart so deeply because it's such a misrepresentation of the faith.

At the end of the day we're all spirits having a physical experience. That really comes from my relationship with Islam because it just makes me really conscious of my action.

How do I transform and be believable as Krogstad in "A Doll's House" or Sir Peter Teazle in "A School for Scandal".

It was really a focus on how to in some ways keep moving in this direction towards something that allowed me to express myself in a way that sports didn't.

I got into [acting] so late because of sports. And then when I was in grad school, I sort of got lulled into basically forgetting I was black, in - meaning that everyone you play at a conservatory, 95 percent of the characters are non-black.

There was things just like not being able to date or - I'm talking like 15, 16 - like just certain things that my friends started to do. Like, they started to get phone calls from girls or like, you know, go and hang out 10, 11 at night, kind of going to the movies. There were just certain things that - it's not that I couldn't do all of those things. It's just that every choice was really deliberate and conscious and thought out and sort of balanced against the religion in a way where I felt - I wasn't necessarily trying to convert at 12 like [my mother] was.

I've personally been on the outside sometimes. But I was - I personally was never persecuted especially in the way in which sharing my own experiences.

Having a child is the polar opposite experience of the awards season experience. The awards-season experience requires you to be out in the community, in the heart of the community, at the nucleus of the film community in a really committed way for about a six-month period of time. Having a child requires you to nest, to be in your home, and to create and make your home and environment that is one that is potentially very welcoming and nurturing for a child.

In my time at St. Mary's College, drifting out of sports because it was something that began to feel really finite. And I could see that I didn't have the passion to sustain a career in sports.