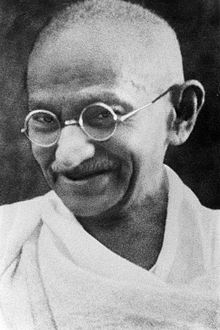 Mohandas Karamchand Gandhi (/ˈɡɑːndi, ˈɡæn-/; Hindustani: [ˈmoːɦənd̪aːs ˈkərəmtʃənd̪ ˈɡaːnd̪ʱi] ( listen); 2 October 1869 – 30 January 1948) was an Indian activist who was the leader of the Indian independence movement against British rule. Employing nonviolent civil disobedience, Gandhi led India to independence and inspired movements for civil rights and freedom across the world. The honorific Mahātmā (Sanskrit: "high-souled", "venerable")—applied to him first in 1914 in South Africa—is now used worldwide. In India, he is also called Bapu (Gujarati: endearment for father, papa) and Gandhi ji, and unofficially known as the Father of the Nation.

The Muslim is as much an Indian as I am and of the same blood.

A religion cannot be sustained by the number of its lip-followers denying in their lives its tenets.

We are the makers of our own state and. . . individuals who realize the fact need not, ought not, to wait for collective action.

There is every reason for being cautious about founding new universities till India has digested Her newly acquired freedom.

Khadi work without the mastery of the science of khadi will be love's labour lost in terms of Swaraj.

There is no one without faults, not even men of God. They are men of God not because they are faultless, but because they know their faults, they strive against them, they do not hide them, and are ever ready to correct themselves.

Against, Correct, Faults, Men, Past

Englishmen must learn to be Brahmins, not banias.

Blind adoration, in the age of action, is perfectly valueless, is often embarrassing and, equally, often painful.

The message of khaddar can penetrate to the remotest villages if we only will that it shall be so.

For thousands to do to death a few hundreds is no bravery. It is worse than cowardice. It is unworthy of nationalism, of any religion.

The external is in no way the essence of religion, but the external often proclaims the internal.

Do you think I am superstitious? I am a super-atheist.

A government builds its prestige upon the apparently voluntary association of the governed.

Non-violence is the greatest force at the disposal of mankind. It is mightier than the mightiest weapon of destruction devised by the ingenuity of man.

Without satyagraha carried out in the proper spirit, there is no victory, no Swaraj.

Even if the whole of India, ranged on one side, were to declare that Hindu-Muslim unity is impossible, I will declare that it is perfectly possible.

Temple going is for the purification of the soul.