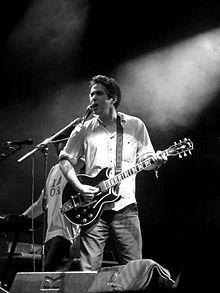 Matthew Stephen "M." Ward (born October 4, 1973) is a singer-songwriter and guitarist from Portland, Oregon. Ward's solo work is mixture of folk and blues-inspired Americana analog recordings; he has released nine albums since 1999, primarily through independent label Merge Records. In addition to his solo work, he is a member of pop duo She & Him and folk-rock supergroup Monsters of Folk, and also participates in recording, producing, and playing with multiple other artists.

I just want the songs to have the staying power as my favorite songs. If you listen to any Hank Williams song, when you're in a good mood, it's going to put you in a better mood. If you happen to be bummed-out, you're going to feel maybe a little more bummed-out and better at the same time. At any time in my life, his music has had meaning and value to me. If a song can shape-shift in that way, that's a sign of success.

The songwriting style, to me, is superior. There was a certain amount of joy in it, no matter how sad the song is. You get joy in listening to these Buddy Holly or Roy Orbison sad lyrics. I'm attracted to songs that have balance between the darks and the lights and giving them all equal opportunity.

When I first started making music, it was learning other peoples songs and putting them onto four-track. Like Beatles songs and stuff. When I started writing, I used the singing side of the production as a vehicle for melody and lyrical ideas.

When I was about 15, I picked up the guitar and learned how to play by going through Beatles chords books. I got this Christmas gift with the entire Beatles catalog.

I always prefer other people's interpretations over my own, so I'm not very quick to make explicit what exactly a song or record is about.

I have a very strong belief in God.

I like using concrete imagery, but I don't feel that's what it's about. It's a combination of concrete and abstract to take the listener somewhere they know better than you. That's true for music, seeing a painting, watching a movie. . . it's all some kind of an escape.

From a very early age, I started to get really interested in how songs were put to tape. Not just listening to the songs, but the way the songs were recorded.

When I started to take literature and poetry classes, I just started to get inspired by these new incredible works of art that I had never seen or heard of before. I wrote a lot of bad high-school poetry, just like pretty much everyone did, I think, at some point. For me, the inspiration never really stopped.

Even though someone has died, a piece of their spirit can still be alive. That's an exciting world for me to take music into, or to attempt to do that.

I love the idea that I planned my career. I did not. It started out by getting invitations from artists that I really love and respect, to share a stage. . . I've been very lucky in that I haven't had to create a five-year plan. It's evolved.

It's a hard thing to explain, but the more I arrange for strings, the more I realize the possibilities.

I don't really watch TV series because I don't want to get hooked on them and have them suck up all my time.

There's at least one fist bump every interview.

I definitely don't see myself as much of a singer, because my upbringing is really based around the guitar, learning chord progressions and that sort of thing. So the singing aspect of what I do has been a secondary adventure.

If you think of the way Howlin' Wolf made records, you get the feeling there wasn't a production manager onsite, or a publicist having his say on how he should sing the songs. When you listen to his records, you feel like you're tapping into his voice.

I don't like the way recording to digital sounds.

I remember when I was 5 or 6 years old, gospel music felt familiar, like I had heard it in the womb or something. A lot of those old gospel songs still give me that feeling, that it's older than time and there's actually music that can tap into a universal subconscious, or whatever word you want to put on it.

I love the sound of Elmore James, the sound early guitarists like him got just by using minimal means.

I learned a long time ago that fame and money is not a ticket to happiness.