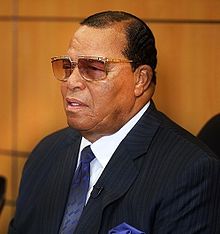 Louis Farrakhan Sr. (born Louis Eugene Walcott; May 11, 1933), formerly known as Louis X, is an American religious leader, black nationalist, activist, and social commentator. He is the leader of the religious group Nation of Islam (NOI) and served as the minister of major mosques in Boston and Harlem, and was appointed by longtime NOI leader Elijah Muhammad as the National Representative of the Nation of Islam.

My god will wipe this country (America) from the face of the earth.

Fidel Castro is loved down into the children. The Revolution won't die!

When a man refuses to take money from those who give money to politicians, you don't pay the piper and sit back and let somebody else call the tune.

I never endorsed Donald Trump or any of the candidates who are running for the nomination that would make them the leader of their party. I said of Mr. Trump that I give him credit as the only one who stood in front of "some" members of the Jewish community and told them he did not need or want their money. This was very big because any man who is able to stand on his own is free enough to do what is in the best interest of the country. That is what I said and that is what I meant.

There, in the middle of this mall is the Washington Monument, 555 feet high. But if we put a one in front of that 555 feet, we get 1555, the year that our first fathers landed on the shores of Jamestown, Virginia as slaves.

Another method (of depopulation) is disease infection through bio-weapons such as Ebola and AIDS, which are race targeting weapons. There is a weapon that can be put in a room where there are Black and White people, and it will kill only the Black and spare the White, because it is a genotype weapon that is designed for your genes, for your race, for your kind.

The Qur'an says that every soul must taste of death. None of us can escape that, but for you there is no such thing as 'death'.

The Middle East is now filled with death and destruction and that was the aim of Neo-Conservatives who planned this destruction of seven Muslim nations in five years and they are on schedule and the final nation in their sights to destroy is the Islamic Republic of Iran.

Comandante Fidel Castro is a gifted communicator. He is a brilliant, brilliant mind. But the thing that struck me most about him was he was not a "nationalist. "

You have never had fair press in America.

If we can reform the man and make him a better man and a God-fearing man, then we have a chance, we believe, to build a better world.

What can you do? [Bernie] Sanders, as a Jewish man: What could Pharaoh do to extend his time, and stop the plagues from coming on Egypt? This is the modern "Egypt", Mr. Sanders. Let the Black man go and give us justice, and these things that are whipping you today will start diminishing, and you will get a longer period of time.

Every human being is a Muslim by nature, not by religious practice. By nature!

As the condition of America and the world degenerates, it is we who are the weak or the poor or the ignorant who feel it worse.

"Rituals" don't make you righteous, it's uprightness: living up to moral principles and ethical principles, and submitting to universal law established by God.

Segregation was ugly but we made something good out of something ugly. Since we were not welcome in other places run by White people, we were forced by circumstances to let our dollars circulate in our own communities. When you were young and I was young, there was a plethora of Black businesses. But when White folks said, "yes, come and spend your money with us," we ran downtown when we could only pass through downtown. Now downtown has our money.

No candidate at present is thinking of justice for the Black and the Red and the Brown in this manner. And none of them are showing they will accept to let us go to save America from the Wrath of God. So Black and White have to know America now is in the crosshairs of God Himself, the Great Mahdi.

The violence that has been going on incessantly in our community, getting worse and worse by the day, when we are slaughtering ourselves in unprecedented numbers; filled with self-hatred for each other in a spirit of retaliation and revenge. You kill my dog, I'll kill your cat, as though there are no consequences for this behavior, I have warned us about for the last three, nearly four decades telling our people we're going to have to pay a price for this.