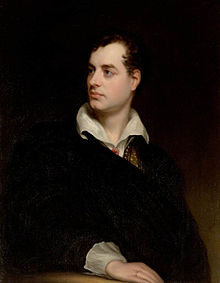 George Gordon Byron, 6th Baron Byron FRS (22 January 1788 – 19 April 1824), known as Lord Byron, was an English nobleman, poet, peer, politician, and leading figure in the Romantic movement. He is regarded as one of the greatest British poets and remains widely read and influential. Among his best-known works are the lengthy narrative poems Don Juan and Childe Harold's Pilgrimage as well as the short lyric poem "She Walks in Beauty".

The poor dog, in life the firmest friend, The first to welcome, foremost to defend, Whose honest heart is still the master's own, Who labours, fights, lives, breathes for him alone, Unhonour'd falls, unnoticed all his worth, Denied in heaven the soul he held on earth, While man, vain insect hopes to be forgiven, And claims himself a sole exclusive heaven.

Between two worlds life hovers like a star, twixt night and morn, upon the horizon's verge.

Though the day of my Destiny 's over, And the star of my Fate hath declined, Thy soft heart refused to discover The faults which so many could find.

This is to be along; this, this is solitude!

From the mingled strength of shade and light A new creation rises to my sight, Such heav'nly figures from his pencil flow, So warm with light his blended colors glow. . . . . The glowing portraits, fresh from life, that bring Home to our hearts the truth from which they spring.

I have a notion that gamblers are as happy as most people - being always excited.

Out of chaos God made a world, and out of high passions comes a people.

Think'st thou existence doth depend on time? It doth; but actions are our epochs.

Tis pleasant purchasing our fellow-creatures; And all are to be sold, if you consider Their passions, and are dext'rous; some by features Are brought up, others by a warlike leader; Some by a place--as tend their years or natures; The most by ready cash--but all have prices, From crowns to kicks, according to their vices.

The image of Eternity--the throne Of the Invisible; even from out thy slime The monsters of the deep are made; each zone Obeys thee; thou goest forth, dread, fathomless, alone.

Sweet is old wine in bottles, ale in barrels.

Curiosity kills itself; and love is only curiosity, as is proved by its end.

A celebrity is one who is known to many persons he is glad he doesn't know.

A material resurrection seems strange and even absurd except for purposes of punishment, and all punishment which is to revenge rather than correct must be morally wrong, and when the World is at an end, what moral or warning purpose can eternal tortures answer?

My slumbers--if I slumber--are not sleep, But a continuance of enduring thought, Which then I can resist not: in my heart There is a vigil, and these eyes but close To look within; and yet I live, and bear The aspect and the form of breathing men.

But beef is rare within these oxless isles; Goat's flesh there is, no doubt, and kid, and mutton; And, when a holiday upon them smiles, A joint upon their barbarous spits they put on.

So bright the tear in Beauty's eye, Love half regrets to kiss it dry.