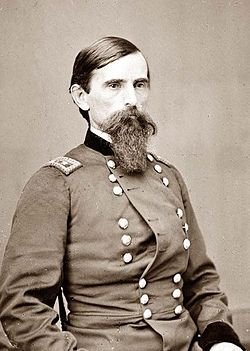 Lewis Wallace (April 10, 1827 – February 15, 1905) was an American lawyer, Union general in the American Civil War, governor of the New Mexico Territory, politician, diplomat, and author from Indiana. Among his novels and biographies, Wallace is best known for his historical adventure story, Ben-Hur: A Tale of the Christ (1880), a bestselling novel that has been called "the most influential Christian book of the nineteenth century."

A man thirty years old, I said to myself, should have his field of life all ploughed, and his planting well done; for after that it is summer time.

The architect had not stopped to bother about columns and porticos, proportions or interiors, or any limitation upon the epic he sought to materialize; he had simply made a servant of Nature - art can go no further.

I know what I should love to do - to build a study; to write, and to think of nothing else. I want to bury myself in a den of books. I want to saturate myself with the elements of which they are made, and breathe their atmosphere until I am of it. Not a bookworm, being which is to give off no utterances; but a man in the world of writing - one with a pen that shall stop men to listen to it, whether they wish to or not.

The monuments of the nations are all protests against nothingness after death; so are statues and inscriptions; so is history.

A man is never so on trial as in the moment of excessive good fortune.

All calculations based on experience elsewhere, fail in New Mexico.

To begin a reform, go not into the places of the great and rich; go rather to those whose cups of happiness are empty--to the poor and humble.

Repentance must be something more than mere remorse for sins: it comprehends a change of nature befitting heaven.

While craving justice for ourselves, it is never wise to be unjust to others.

Youth is but the painted shell within which, continually growing, lives that wondrous thing the spirit of a man, biding its moment of apparition, earlier in some than in others.

Would you hurt a woman worst, aim at her affections.

What children we are, even the wisest! When God walks the earth, his steps are often centuries apart.

As a rule, there is no surer way to the dislike of men than to behave well where they have behaved badly.

Pure wisdom always directs itself towards God; the purest wisdom is knowledge of God.

Men speak of dreaming as if it were a phenomenon of night and sleep. They should know better. All results achieved by us are self-promised, and all self-promises are made in dreams awake. Dreaming is the relief of labor,the wine that sustains us in act. We learn to love labor, not for itself, but for the opportunity it furnishes for dreaming, which is the great under-monotone of real life, unheard, unnoticed, because of its constancy. Living is dreaming. Only in the graves are there no dreams.

It is never wise to slip the bands of discipline.

Sympathy is in great degree a result of the mood we are in at the moment; anger forbids the emotion. On the other hand, it is easiest taken on when we are in a state of most absolute self-satisfaction.