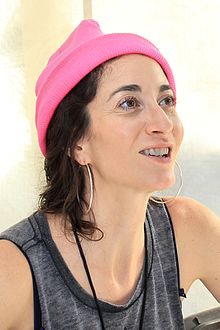 Lauren Oliver (born Laura Suzanne Schechter; November 8, 1982) is an American author of numerous young adult novels including Panic, the Delirium trilogy; Delirium, Pandemonium and Requiem, and Before I Fall, which became a major motion picture in 2017. Her novels have been translated into more than thirty languages internationally. Oliver is a 2012 E.B. White Read-Aloud Award nominee for her middle-grade novel Liesl & Po, as well as author of the middle-grade fantasy novel The Spindlers.

i suppose that's the secret, if you're ever wishing for things to back the way they were. You just have to look up.

I used to lie here like this all summer long,' I tell her. 'I'd come up here and just stare at the sky. ' She rolls over on her back so she's staring up as well. 'Bet this view hasn't changed much, has it?' What she says is so simple i almost laugh. She's right, of course. 'No. This looks exactly the same. ' I suppose that's the secret, If you're ever wishing for things to go back to the way they were. You just have to look up.

Because if it weren’t for me, Lena and Alex would never have been caught at all. I told on them. I was jealous.

I’m not the Hana everyone told me I would be after my cure.

Cure, Cures, Everyone, Hana, Told, Would Be

The mark of the procedure. A real one. Lu is cured.

Things would get difficult again. But that was okay too. The bravery was in moving forward, no matter what.

His eyes are the color of honey. These are the eyes I remember from my dreams.

It is war now, and armies need symbols.

I’m sorry,” he repeats again, too low for Raven and Tack to hear. “I’m sorry for everything.

There are more of us than you think.

The flip side of freedom is this: When you're completely free, you're also completely on your own.

That's all I want. Just you and me. Always.

Finishing books - and leaving the world you've created - is always a kind of emotionally wrenching experience. I usually cry.

That's when you realize that most of it-life, the relentless mechanism of existing-isn't about you. It doesn't include you at all. It will thrust onward even after you've jumped the edge. Even after you're dead.

So far I've seen the life studies packet used as (1) an umbrella, (2) a makeshift towel, (3) a pillow, and now this. I have never actually seen anyone study with it, which either means that everyone who graduates from Thomas Jefferson will be totally unprepared for life or that certain things can't be learned in bullet-point format.

And for a moment―for a split second―everything else falls away, the whole pattern and order of my life, and a huge joy crests in my chest. I am no one, and I owe nothing to anybody, and my life is my own.

My stomach gets that hollowed-out feeling. It's amazing how words can do that, just shred your insides apart.

Everything in me feels fluttering and free, like I could take off from the ground at any second. Music, I think, he makes me feel like music.

They haven't killed us yet," I say, and I imagine that one day I will fly a plane over Portland, over Rochester, over every fenced-in city in the whole country, and I will bomb and bomb and bomb, and watch all their buildings smoldering to dust, and all those people melting and bleeding into flame, and I will see how they like it. If you take, we will take back. Steal from us, and we will rob you blind. When you squeeze, we will hit. This is the way the world is made now.