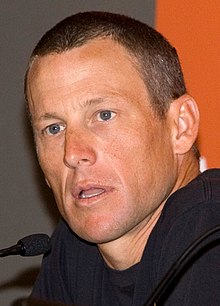 Lance Edward Armstrong (born Lance Edward Gunderson on September 18, 1971) is an American former professional road racing cyclist. Armstrong is the 1993 professional world champion, and won the Tour de France a record seven consecutive times from 1999 to 2005. However, in 2012, he was banned from sanctioned Olympic sports for life as a result of long-term doping offenses. As part of those sanctions, all results going back to August 1998, including his seven Tour wins, were voided.

What is stronger, fear or hope?

My advice to you is never stop believing.

Portland, Oregon won't build a mile of road without a mile of bike path. You can commute there, even with that weather, all the time.

The truth is, if you asked me to choose between winning the Tour de France and cancer, I would choose cancer. Odd as it sounds, I would rather have the title of cancer survivor than winner of the Tour, because of what it has done for me as a human being, a man, a husband, a son, and a father.

If life gives you lemons, drink the juice in order to mask the presence of performing-enhancing drugs.

It's a fact that children with cancer have higher cure rates than adults with cancer, and I wonder if the reason is their natural, unthinking bravery. . . Adults know too much about failure; they're more cynical and resigned and fearful.

It's nice to win. I'll never win again. I may have to take up golf - take on Tiger.

At least I didn't invent a dead girlfriend

My ruthless desire to win at all costs served me well on the bike but the level it went to, for whatever reason, is a flaw. That desire, that attitude, that arrogance.

I'm not a patient person.

There was certainly a dishonesty there that I think is totally regrettable and inexcusable. The ringleading, the bullying: not totally true.

You know, once I was thinking of quitting when I was diagnosed with brain, lung and testicular cancer all at the same time. But with the love and support of my friends and family, I got back on the bike and won the Tour de France five times in a row. But I'm sure you have a good reason to quit.

When you win, you don't examine it very much, except to congratulate yourself. You easily, and wrongly, assume it has something to do with your rare qualities as a person. But winning only measures how hard you've worked and how physically talented you are; it doesn't particularly define you beyond those characteristics.

If I can't face my accusers, that's a joke. We did that in medieval times.

Knowledge is power, community is strength and positive attitude is everything

Marathons are hard because of the physical pain, the pounding on the muscles, joints, tendons.

I want to finish by saying that I intend to be an avid spokesperson for testicular cancer once I have beaten the disease. I want this to be a positive experience and I want to take this opportunity to help others who might someday suffer from the same circumstance I face today.

The Tour (de France) is essentially a math problem, a 2,000-mile race over three weeks that's sometimes won by a margin of a minute or less. How do you propel yourself through space on a bicycle, sometimes steeply uphill, at a speed sustainable for three weeks? Every second counts.

My mom was such a strong character. I don't want to say she was like a man, but she was tough.