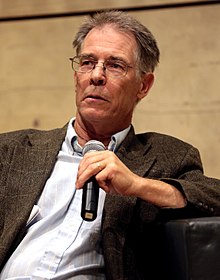 Kim Stanley Robinson (born March 23, 1952) is an American writer of science fiction. He has published nineteen novels and numerous short stories but is best known for his Mars trilogy. His work has been translated into 24 languages. Many of his novels and stories have ecological, cultural, and political themes running through them and feature scientists as heroes. Robinson has won numerous awards, including the Hugo Award for Best Novel, the Nebula Award for Best Novel and the World Fantasy Award. Robinson's work has been labeled by The Atlantic as "the gold-standard of realistic, and highly literary, science-fiction writing." According to an article in The New Yorker, Robinson is "generally acknowledged as one of the greatest living science-fiction writers."

But lies were what people wanted; that was politics.

Economics was like psychology, a pseudoscience trying to hide that fact with intense theoretical hyperelaboration. And gross domestic product was one of those unfortunate measurement concepts, like inches or the British thermal unit, that ought to have been retired long before.

History is a wave that moves through time slightly faster than we do.

You can only kill disappointment with a new try.

Science was many things, Nadia thought, including a weapon with which to hit other scientists.

It is easy to live multiple lives! What is hard is to be a whole person

The Quran says nothing about the veil, except for an injunction to veil the bosom, which is obvious. As for the face, Muhammad's wife Khadijeh never wore the veil, nor did the other wives of the Prophet after Khadijeh died. [. . . ] The ulema have twisted the Quran with their hadith, always twisting it toward those in power, until the message Muhammad laid out so clearly, straight from God, has been reversed, and good Muslim women are made like slaves again, or worse.

The word of God came down to man as rain to soil, and the result was mud, not clear water. (Bistami) Pg. 128

There's Jevon's paradox that the better we get at efficiently using energy the more energy we use; so that and that machine technology improvements per se do not necessarily reduce our impacts because we immediately double down on how much we use.

We all have secret lives. The life of excretion; the world of inappropriate sexual fantasies; our real hopes, our terror of death; our experience of shame; the world of pain; and our dreams. No one else knows these lives. Consciousness is solitary. Each person lives in that bubble universe that rests under the skull, alone.

I grew up in a utopia, I did. California when I was a child was a child's paradise, I was healthy, well fed, well clothed, well housed. I went to school and there were libraries with all the world in them and after school I played in orange groves and in Little League and in the band and down at the beach and every day was an adventure. . . . I grew up in utopia.

We dream, we wake on a cold hillside, we pursue the dream again. In the beginning was the dream, and the work of disenchantment never ends.

Fights over ideas are the most vicious of all. If it were merely food, or water, or shelter, we would work something out. But in the realm of ideas one can become idealistic.

You could never teach other people anything that mattered. The important things they had to learn for themselves, almost always by making mistakes, so that the lessons arrived too late to help. Experience was in that sense useless. It was precisely what could not be passed along in a lesson.

Anyway that's a large part of what economics is - people arbitrarily, or as a matter of taste, assigning numerical values to non-numerical things. And then pretending that they haven't just made the numbers up, which they have. Economics is like astrology in that sense, except that economics serves to justify the current power structure, and so it has a lot of fervent believers among the powerful

If the amount of money going into the war economy were invested in landscape restoration, we would be in a far more positive position. It may get a little dire before we pull together, but I think when the prosperous nations, and in particular the US, realise they're wrecking their own kids' lives, there will be a mass change in value. It will be a difficult century, and ugly, but I don't think that in the end people are so stupid as to kill themselves off.

Utopia is the process of making a better world, the name for one path history can take, a dynamic, tumultuous, agonizing process, with no end. Struggle forever.

Childhood isn't just those years. It's also the opinions you form about them afterward. That's why our childhoods are so long.

The vaunted experience of age was perhaps only a matter of wounds and scarring -- that young minds to old minds might be as young bodies to old bodies: stronger, more vital, less twisted by damage.

One of the chief features of incompetence was an inability to see it in oneself.