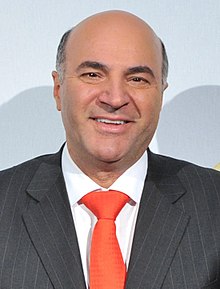 Terence Thomas Kevin O'Leary (born 9 July 1954) is an Irish Canadian businessman, author and television personality. He co-founded O'Leary Funds and SoftKey. From 2004-14, he appeared on various Canadian television shows, including the business news programmes SqueezePlay and The Lang and O'Leary Exchange, as well as the reality television shows Dragons' Den and Redemption Inc. In 2008, he appeared on Discovery Channel's Project Earth. Since 2009, he has appeared on Shark Tank, the American equivalent of Dragons' Den.

Don’t let the dark clouds of greed confuse you

I have great people working for me now. I surround myself with smart people.

The road to riches is never straight and narrow. It can be riddled with financial land mines.

People are aware of what I stand for through television. Nobody gets rich on TV but you build brand. That's what I'm attempting to do.

I want to go to bed richer than when I woke up. The pursuit of wealth is a wonderful thing, but the thing is you have to be honest about it, you have to tell the truth.

You'd rather own gold; not the miner

I'm ashamed of what has happened to Canada. And I'm not leaving a $1. 5 trillion deficit to my kids. No chance in hell is that happening.

When you come to 'Shark Tank,' the only person you should listen to is me, because you know you're getting the truth. I'll decide if it's worth it, and after I'm finished, the rest of the people can look into it.

Vision is nothing without a plan to execute it.

Trump has been very, very open and clear on what he's going to do. He's going to make the U. S. very competitive on taxes, corporate and personal. He's eliminating policy on carbon and the regulatory environment on shale and energy and pipeline development. These are all things that Canada has to do and we no longer have a competitive environment to do them in. It manifests itself in the slow grind of our economy.

For whatever reason somebody can be convinced to buy a PC, it opens up a whole new market for all of us in the software business.

Many blue-collar families struggling to pay rent would be happy to skip paying optional union dues.

Television is the most interesting hobby I've ever had.

All we do is bring the debate from both sides, and let you as a viewer decide where you want to end up on the issue. That's very important. That's exactly what happens in 'Redemption Inc. '

All businesses require capital, management and labor, and business executives, wanting to grow and maintain profitable enterprises, have a strong incentive to keep costs, including labor, as low as possible.

I think a book is your calling card, your business card.