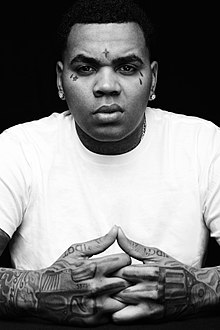 Kevin Jerome Gilyard (born February 5, 1986), better known by his stage name Kevin Gates, is an American rapper, singer, and entrepreneur. He is currently signed to Bread Winners' Association with a partnership with Atlantic Records. His debut studio album, Islah, released in January 2016 and peaked at number two on the US Billboard 200 chart. Prior to Islah, Gates also released numerous mixtapes including Stranger Than Fiction, By Any Means, and Luca Brasi 2, all of which peaked in the top 40 on the Billboard 200 chart.

Say what you doin and not what you finna do

I don't pay attention to sales because it's not about that for me. It's about the music. Music is all I have.

The energy in the daytime is so different because everyone is so unhappy and depressed and you can pick up on that energy psychokinetically. So I like to come out at night. Everything's settled, you can see more.

Emotionally I'm an introvert but it come off as aggression

A hot producer might not make a hot beat for me. I just love music.

Anything lost, can be found again, except for time wasted A vision without action is merely a dream Action, it's the grind, it's the hustle, it's the persistence

Being in the neighborhood and the poverty stricken environment that I grew up in, I took a detour. I gravitated towards some of the individuals that did a lot of the wrong things with the right intentions.

Everybody round you pretendin that they your partner, let you have a problem they won't even help you out

I write a lot of my best music in the car, like late night. Three, four in the morning. I'm in the passenger seat, I got my driver, my getaway driver. My Bonnie, I'm Clyde. That's when everything is just settled. In the daytime it's chaotic. Everybody just goin' nowhere fast. In a rush to go nowhere.

Don't respect a lot of rappers, feel I had a harder life

I've had good times and I've had bad times and I reminisce, maybe when I lay down, but throughout my day I keep myself engulfed in whatever moment I'm in because it could steer me into a depressed state.

Loves a battlefield it's not a one night stand.

Never break or fold, that's what it takes to be major.

I love God, I love everybody else around me as myself, and I love my enemy.

I don't have a religion. I ain't nothing wrong with church as long as they selling chicken. Cause I read the Quran, I read the Kabalah, I read the Bible. They all got the same three basic principles: Love God, love your neighbor as yourself, and. . . As far as me being, I live by those principles.

I love to be clean. I wear the same things, all of my clothes pretty much look the same. I'm a plain and simple type of guy. I don't really do a lotta busy colors and things of that nature. I feel like less is more.