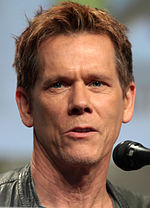 Kevin Norwood Bacon (born July 8, 1958) is an American actor and musician. His films include musical-drama film Footloose (1984), the controversial historical conspiracy legal thriller JFK (1991), the legal drama A Few Good Men (1992), the historical docudrama Apollo 13 (1995), and the mystery drama Mystic River (2003). Bacon is also known for taking on darker roles such as that of a sadistic guard in Sleepers (1996) and troubled former child abuser in a critically acclaimed performance in The Woodsman (2004). He is equally prolific on television, having starred in the Fox drama series The Following (2013–2015). For the HBO original film Taking Chance (2009), Bacon won a Golden Globe Award and a Screen Actors Guild Award, also receiving a Primetime Emmy Award nomination. The Guardian named him one of the best actors never to have received an Academy Award nomination. In 2003, Bacon received a star on the Hollywood Walk of Fame for his contributions to the motion pictures industry.

With a lot of actors, you've got to chip through the surface to see who the real person is.

I think of myself more as a workhorse actor. It will be hot and cold and up and down, but no one will kick me out of the business.

I don't read reviews. I haven't read them for probably 30 years. I can't. When they're bad, they're really rough, and when they're good, they're not good enough. You can always find something to stress over.

I don't want to stop acting, but acting in some ways is a young man's game.

My brother is the lifelong musician, he made the choice to do that when we were very, very young kids. I remember him playing in bands and listening to the music he was writing in the house - he's nine years older than me.

Obviously, my perception of the world is one where humans are a threat to our survival.

My kids don't watch my movies. What I want to do is go home and hug my kids, talk to them and engage with them.

You have to keep the fights clean and the sex dirty.

The hardest gig there is in entertainment is to be the lead in an hour show, especially if it's a show that's blood and guts and fighting. It's rough. I love to work, but to do something different is really exciting.

There's something therapeutic about nudity. . . Take away the Gucci or Levi's and we're all the same.

I do struggle with how much and in which way, as an artist or celebrity, that you voice your political views.

I felt as if I was the brunt of some massive joke at my expense: Can you believe this loser can be connected to Marlon Brando and Katharine Hepburn? But through the years I have learned to tolerate and sometimes embrace the idea. People have asked me if I consider it an honour. Well, all it indicates is that I've been in a lot of movies with a lot of people. And besides that there are plenty of other actors that would work.

I didn't get into this so I could talk about my work, my movies. You become an actor to act.

I'm always happier and a better actor when I can really lose myself in a character and become somebody else.

Actors, Character, Happier, I Can, Somebody

Ninety-five percent of celebrity is good.

Critics can be your most important friend. I don't read criticism of my stuff only because when it's bad, it's rough-and when it's good, it's not good enough.